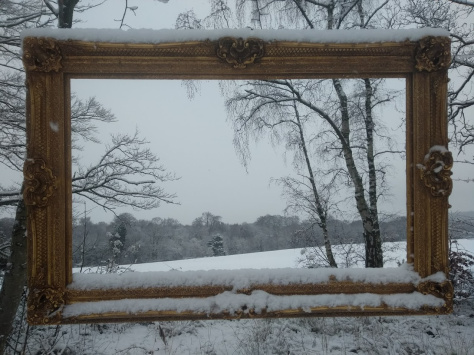 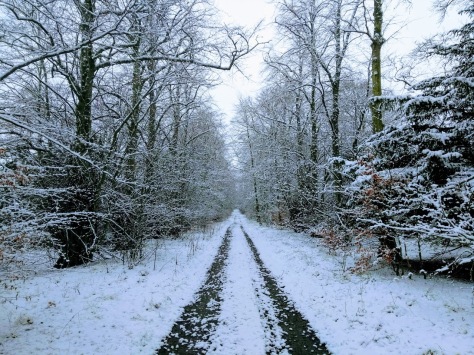 Yesterday morning I was all set to get stuck into writing the Seacliff walk, which I’d done over the weekend, only to be childishly surprised by a succulent fall of snow. All was white, white, white, & knowing just how fast the thaw kicks in round these parts, I thought it best to rush out & take some photos while I had the chance. Choosing the lengthy potter around the newly renovated steading at Broadwoodside, part of this route takes in the  lovingly nurtured woodland brilliantly purchased by the Gifford Community, & with lots of aesthetic trinkets to see along the way it was a fine choice to snatch those all important wintry photographs. 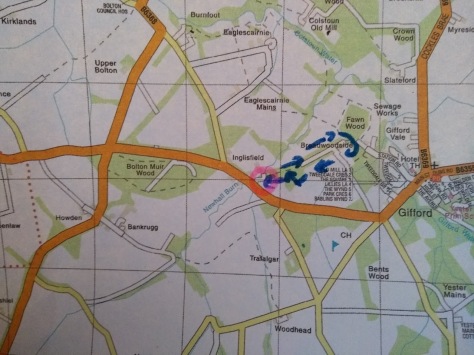 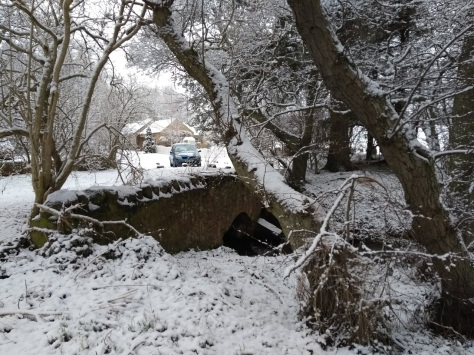 Just off the B6355 between Gifford & Pencaitland is the house of Inglisfield, beside whose gate-lodge one finds ample space to park the car. Thus doing, off trotted me & Daisy to the crawing of the rooks & crows, over a wee stone bridge & through a fine gate. This brought us to a long stretch of woodland, with a river bubbling icily to our left. I soon discovered that Daisy loves snow, diving head first into the stuff & fluffing it off her face with eager enthusiasm.

I love the timelessness of a snowy woodland scene – the collective human brain has been experiencing pretty much the same thing for hundreds of thousands of years (especially in the Ice Ages) a shared memory that returns us all to our elk-eating, primordial roots. I also love the freshness of the air-chill in my lungs, a right dust-clearer. So off I was happily stomping along a wide & gently rising path which scythed between two epic fields, & flanked by a procession of trees, the branches of which were bowing like courtiers at a ball. Monty Pythonesque, at one point on our right appeared an empty picture-frame hanging in mid-air. 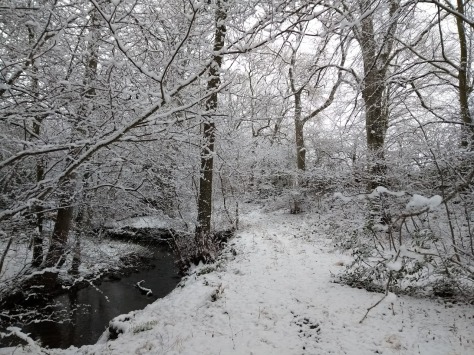 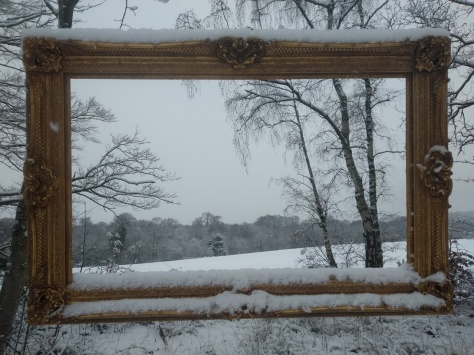 Next up was something of a four-way junction. On our left & right gates opened up into large fields, while ahead the track continued through the woods, with a sub-path leading slightly to the right. Following the latter, we came to a curious neo-Greacian portico, rather like the unfinished one on Calton Hill in Edinburgh. 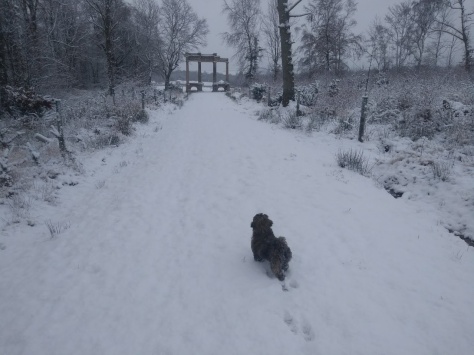 It had been added in the 1860s to Strathleven House, Dunbarton, then dismantled & re-erected on this spot in 2000. In an interesting visual effect, Broadwoodside came into view between the columns like the midsummer sunrise at Stonehenge. Once part of the Yester Estate, Broadwoodside is older than Gifford itself, appearing as ‘Broadwoodsyid’ in Blau’s 1654 map of Scotland – the first complete map of the country.

The potico had been moved here by the latest owners of Broadwoodside – Anna and Robert Dalrymple – whose home peeped out from the fieldtop’s periphary across the open field. They’re a good sort are the Dalrymples – whose fabulous gardens have won admiratioon across the board. Starting very much witjh a blank canvas, they’ve kinda been making it up as they go along; when blending their modernist instinct with intelligent planting have ruffled the featheros of the ancien regime no end, as these superlative-laden praises make out;

I was spellbound by the wit and elegance at Broadwoodside – a garden created in less than two decades by Robert and Anna Dalrymple from derelict yards surrounding an ancient agricultural steading in East Lothian. David Wheeler 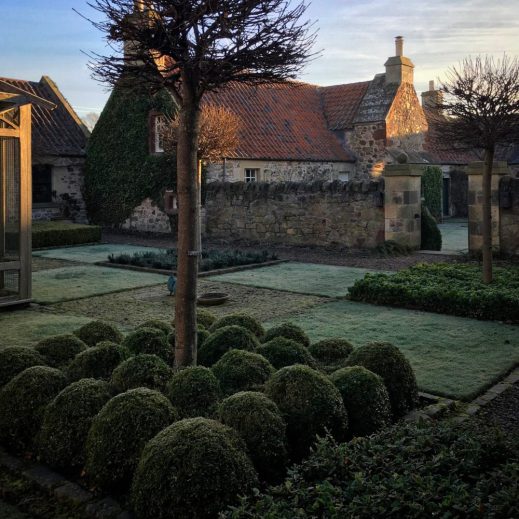 A garden that employs all the classical devices of symmetry, perspective and precise alignment but does so in such a witty fashion that the familiar becomes fresh and exciting. Agnes Stevenson

This is one of Scotland’s finest contemporary private gardens, with excellent structure, imaginative use of objects, and some of the most eye-catching planting in Scotland … Cutting-edge garden design combined with imaginative planting; who could ask for more? Kenneth Cox

Robert Dalrymple is the son of Major Sir Hew Fleetwood Hamilton-Dalrymple, one of East Lothian’s greatest 20th century figures. Leading a prestigious life in pubic service to the county, he held the office of Deputy Lieutenant between 1964 and 1973, the office of Vice-Lord-Lieutenant between 1973 and 1987 & the office of Lord-Lieutenant between 1987 and 2001. Hew was married to Lady Anne-Louise Hamilton-Dalrymple, who passed away at Leuchie in berwickshire only last month. She was president of the East Lothian Girl Guide Association for many years and  maintained connections with many organisations and charities in North Berwick, annually crowning the lifeboat queen and presenting the horticultural society show prizes for more than 40 years.

After Robert & his wife Anna rescued the farm steading from dereliction, they began to direct gardener Guy Donaldson in fashioning an elegant and inventive garden. Higlights include maple trees trimmed to lollipops & an avenue of hornbeams on one side of the house, skillfully planted to make the distance appear longer than it is (mirrored by the straight lines of white fireweed on the other). It will be open to the public in conjunction with the village gardens of Gifford on Sunday 8 July, while parties of 10 or more can be arranged by appointment.

Back in mine & Daisy’s world, we left the portico & returned to the long path. After a wee while I noticed a couple of anti-dog posters. Now, £25 for a new chicken is a bit steep I’d say, but I’m not getting involved…

Passing the entrance to Broadwoodside on our right, with horses in the snow, & the going a bit slutchy underfoot, we came to the gated entrance to Fawn Wood. At this point four ladies in sports gear running with dogs burst out behind me, one of whom asked if me & Daisy would like to join them. I kindly declined & watched them bolt off through the woods while following behind at a softer pace.

From here the path meanders like a river, where a little further on my odyssey I met a kind gentleman who showed me the best way to get back to my car, mentioning something about following the route of the old Gifford light railway. Now, I’d never heard of this before, but after a little research on the matter in the National Libray (where I am now, actually) I discovered that the line was opened in 1901 at the behest of local landowners who had spent £100,000 in extending the line from the main branch hoping to shift the farm and mineral produce of their estates towards Edinburgh at greater speed and profit. Alas, it was all, ‘conceived too late, poorly planned and badly run,’ & was closed to passengers on 3 April 1933 & to freight on 25 April 1965.The line to Garvald, although proposed, never actually happened btw.

After passing some more of the amusing aesthetic trinkets, me & Daisy came to a gap in the fence, through which we turned right into another section of woodland… Speedy Wood. It felt great to be in the bosom of the Gifford Community Land Company, who got their heads together & down & came up with the cash to by the woods only last April – helped by a grant of £291,520 from the Scottish Land Fund. A little while later we reached the farm road, with cottages hard on our left & Broadwoodside a wee way off to the right – plus another bauble of an O.K. hand at the heart of a circlet of birch saplings.

Ahead we saw a gap in the hedge, which we passed through & entered a big field. Keeping the trees close to our left, in the field behind them we saw a couple of pigs who were friendly enough & left their wee home to say hi. 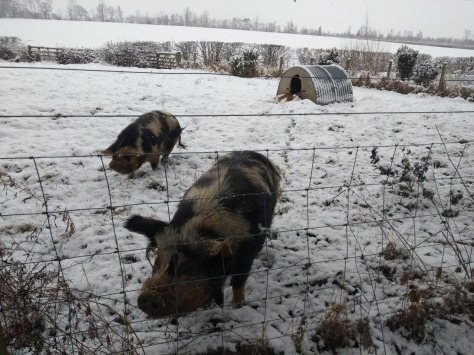 Turning left to skirt the pig-field, the path bends right again into a long straight, with a hedge to one’s left. At the end of this we came across a lovely pond & its well-built boat house. I loved the beige rushes & brown waters all skiffled with snowdust – a lovely sensation of colours.

Continuing onwards. the path curved right at the end of the pond, & led us through some vernal woodland back into the epic field. Turning left, Daisy dashed ahead for quite some way until a phalanx of woods marching from the right almost touches the path. Here we turned right, keeping the woods to our right, & eventually returned to the  4-way junction I mentioned earlier in the walk, just before the portico. 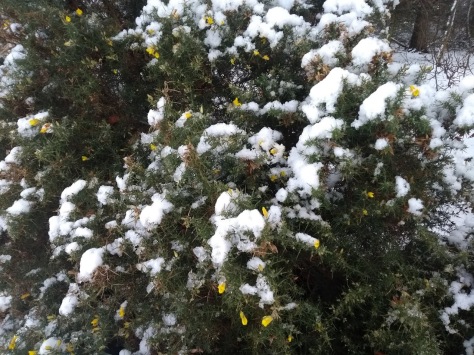 Here we turned left & were soon nestled snugly back at the car. Daisy had had a ball, but I noticed loads of mini icicles on her belly & had to crank the heating up to 4 for a bit, but she was oblivious really. 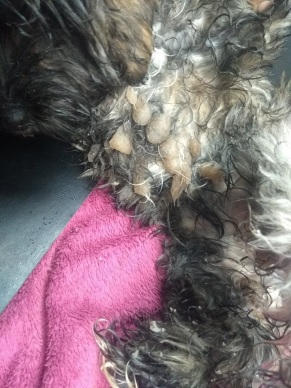 Yes, a wonderful walk was this, not only did I get lots of jolly snow pictures, but also found out about East Lothian’s lost railway system, most of whose routes I should be able to walk at some point in the future. Talking of which, on the drive home I just had to see where the Gifford terminus was. Heading into the village I followed Station Road (of course) until a kind lady pointed it out to me. Apparently folk & cyclists still trip over a sleeper.