As an aesthetic artist, I am absolutely head-over-heels in love with snowmelt. The variety it brings to photographs is immensely satisfying, especially up in the hills with all those lovely rolling contours. For this week’s walk it had to be the Lammermuirs, & I found myself going up two times to the same area because of the sheer quality of air, scenery & solitude. Firstly, & just after the up-county roads had opened following the Beast from the East, me & Daisy headed to Kidlaw for a wide circumnavigation of the Lammerloch Reservoir. A few days later we went to check out an intriguing Iron Age hillfort known as The Castles, at the heart of the Longyester Quarry system.

To reach Kidlaw from most parts of the county, get yourselves to Gifford first, then going up towards the golf club, turn left in the direction of Longnewton. This is a wee hamlet of tall, fine, pastel-painted houses standing in a neat row. It is also something of a T-junction, & half-way between our two walks.

Turning right, the car ribbon’d along the last road before the Lammermuirs, the edge of civilisation, so to speak, & beautiful place to be. Above us buzzards, sparrowhawks and kestrels spiral’d thro the air like a dogfight over London. Behind us the vista spread magnificently along a smooth swathe of green fields & then the Forth, & beyond that the paps of Fife. We were driving  through a part of Yester parish; based around the kirk at Gifford, I’ll leave Reverand Innes, in the Statistical Account of Scotland to introduce matters (1791-99).

There’s plenty of parking at Kidlaw farm, & also some very interesting folklore. Adjoining the farmhouse are the ruins of The Ward, said to have been a keep or baronial prison. In former times, long before the Access Code Scotland (2003), the local lairds of Newtonhall would imprison inside its redoubtable, 5′ thick walls; ‘sturdy beggars, landloupers, tinkers, idle vagabonds & ragamuffins who were trespassing on the lands of Newtonhall.’ These scruffy guys & gals had come up over the Lammermuirs from the direction of Lauderdale, when, ‘arose the necessity of having a secure lock-up to confine them, & prevent them from prowling about the countryside.’ The Ward also used to give a night’s shelter to wayworn travelers, a group of whom, described as gypsies, were on one occasion surprised by James V.

I’m from Burnley myself, Pendle Witch Country, & in the very same year – 1612 – that the old crones Demdike & Annie Chattox were being tried & executed for witchcraft in Lancaster, at Kidlaw a certain Bessie Henderson was also getting into bother. She even confessed to having been “tane away with fyve hellis houndis” which never helps your case, & alongside ‘Katherine Conynghame‘ from Samuelston, went the way as the North Berwick witches & all those other poor ladies who happened to be a bit different under an extremely superstitious king (James VI).

It was time to hit the walk. There was lots of snow, but not impassible, & there was glorious hill country stretching all before us. We first went through a gate at the same time as a bevvy of ladies off to ride their horses in the fields. Me & Daisy instead stuck to the track-path, keeping a small dam & a stream to our left. 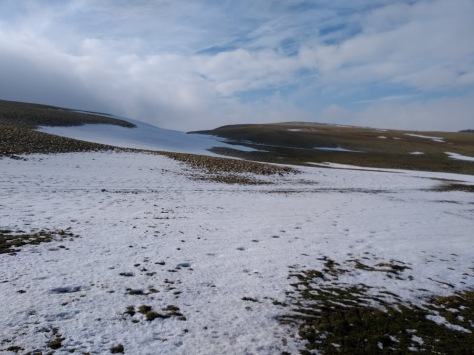 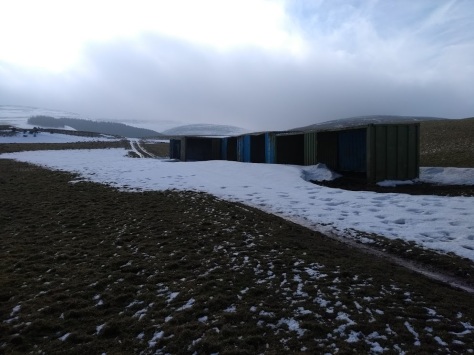 After passing some containers on our right, the track led upwards towards a gate, beyond which lay the frozen emerald of Lammerloch reservoir (opened 1905). Keeping this to our right, we found ourselves winding through a muddy, steep-sided narrow valley. 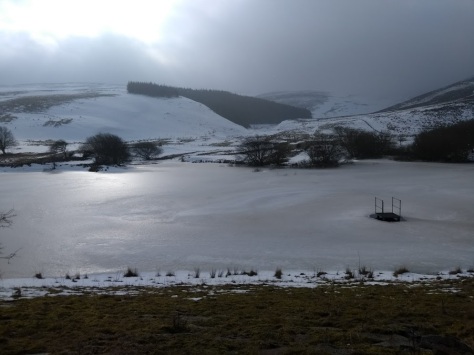 The track then passes a smaller waterbody called Latch Loch. After this comes a gate where one should turn right, but before doing so its only a little diversion to check out the ‘Minsters House’ as I like to call it, standing by another pond. With no power to speak of, it is used by a couple of ministers every now & again for ascetic meditation. Its always nice to just be there a few moments, sharing soul-energy in a religious haven.

Returning the way we came, & reaching the gate, me & Daisy turn’d left & headed uphill. It felt marvelous on the tundra & the snow, Daisy was loving it, & the views were simply delicious. Keeping a stream below us to our right, we followed the track for quite a way.  At the top of the field we then veered right up to a cairn of stones, & enjoyed the Olympian loftiness of it all. 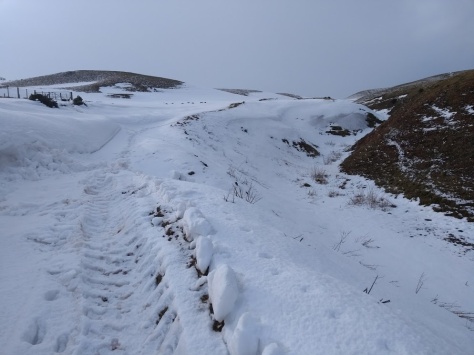 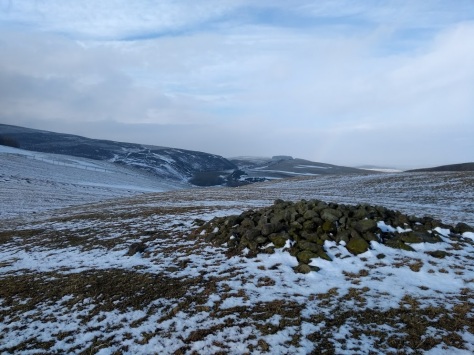 It was time to head home, & the hill sloped kindly back in the direction of the Lammerloch. At the bottom of the field we followed the track into a field next door-but-one to the reservoir. This led us at a slow, happy pace back to the eastern edge of Lammerloch, where I noticed animal prints on the frozen ice. 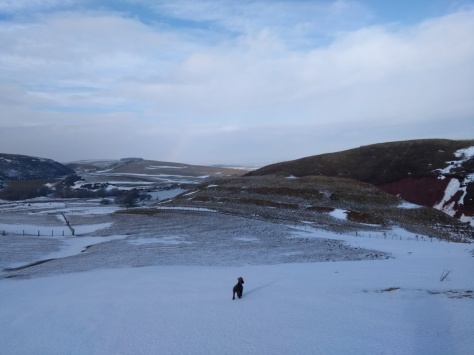 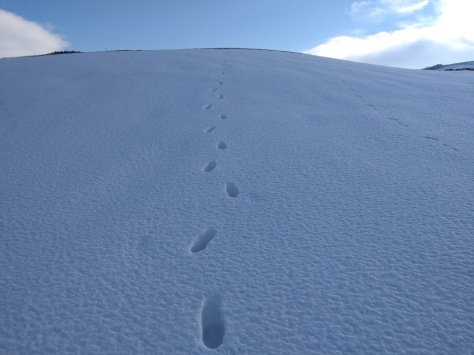 It was time to return the way we came. On the descent to Kidlaw to our front right rose the snowy summit of a prehistoric hillfort on Highside Hill. One of a number of such elevated defence-works in East Lothian, I’m looking forward to making a study of them in the nearish future. My instinct is that the one’s against the Lammermuirs form some kind of Maginot Line for the Votadini, one of which we shall be looking at the now…

Driving through Longnewton from Kidlaw, one soon comes to the entrance-way at Longyester Quarry, where there’s lots of space to park either before or beyond the gate. Once inside the massive field, turn immediately right & skirt its edges. There’s sheep about & this time of the year there lambs as well, frolicking away in mild confusion. 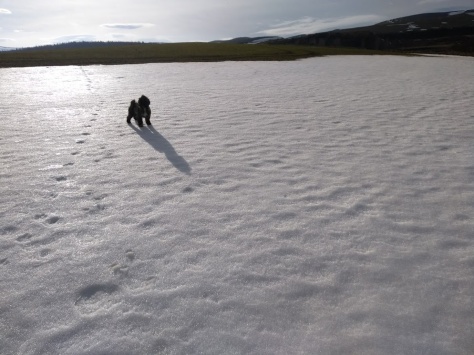 It had been about five days since we did the Kidlaw walk, but there was still snowy patches here & there, finishing like glaciers on the rims of slopes. Daisy was thrill’d to be back among the white stuff as we kept the stream to our right as it gently curved to the left. At one point on this stretch we came across the detritus of sheep, where wool-shed & droppings made interesting patterns on the floor.

As one follows the stream, to the front rises The Castles hillfort. You also notice a wall/fence dropping towards the stream. Treat this as an arrow pointing to where you should cross. 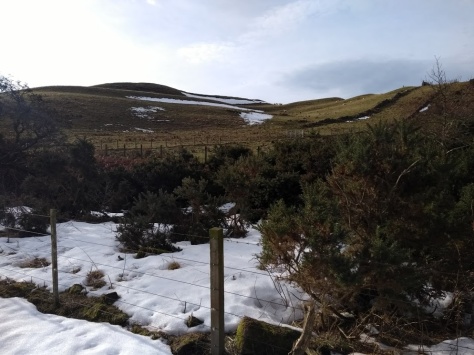 Over the stream & climbing up the slopes, we found ourselves wandering in a windblast an intimidating multivallate, semi-promontory fort. Major lines of defences can still be made out, & it really is one of the hidden gems of the county. This is probably on account of the noisy mechanicals of nearby Longyester quarry putting off the feng-shui-feeling, serenity-seeking walker since 1976. 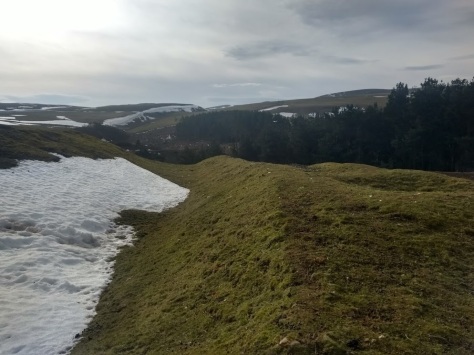 Now here’s the interesting part. The stream that we followed and crossed to reach The Castles is known as the Dambadam Burn, which easily changes phonetically into Dun Badon, ie the hillfort of Badon, especially after the medieval Scottish chronicler, John of Fordun, described Badon as Mount Badamor. A famous Arthurian battle was fought at such a named place, & of course East Lothian has Arthurian connections via King Loth. At first it seems that the Badam element could relate to Saint Bathan/Bothon, to whom Yester Kirk was dedicated. Yet in the Transactions of the Antiquarian & Field Naturalists’ Society (1963/v.IX), James Bulloch wrote;

In the course of the centuries this church acquired a spurious dedication because of the similarity of its name to St. Bathans on the southern slope of the Lammermuirs. Even in the late middle ages the name Bothans became transform’d into St Bothans but there is clear evidence that the original dedication was to Saint Cuthbert. It is told in the Lanercost Chronicle that in 1282 the woodwork of the choir ‘of the church of Bothans in Lothian‘ was being carved at the expense of the rector ‘in honour of Saint Cuthbert, whose church it is.’

We also have the fact that the Roman Geographer, Ptolemy, recorded the Firth of Forth as Boderia, giving us a significant Boder-Badon correlation. Assuming that Dumbadam deriviated from Dum Badon, here is a wee chronicle I’ve assembl’d which shows how an East Lothian location makes sense, chronologically & geographically.

516, Annales Cambraie: The Battle of Badon, in which Arthur carried the Cross of our Lord Jesus Christ for three days and three nights on his shoulders and the Britons were the victors.

The Anglo-Saxons had occupied the Forth area since about 450 AD. Arthur at first kicked them out of Edinburgh, known as the Battle of Mount Agnet, before winning his final battle at Badon, after which the Anglo-Saxons were driven out of the Lothians.

623, Annals of Ulster: The storming of  Rath Guali by Fiachna son of Baetan.

Rath Guali was the Anglo-Saxon stronghold of Bamborough, in Berwickshire. Fiachna son of Baetan was a Gaelic Scot, whose father ruled Ireland & Alba. There is an old Irish poem which reads; Many score of miles From Dun Baetan in Lethead, And much of land as of sea Between it and Imlech Ibhair.’ Imlech Ibhair is in Tipperary, Ireland, & if one were to head towards Lethead, ie Lothian, from there, & sail from Dublin to the Solway, there would indeed be equal amounts of land & sea.

640, Annals of Tigernach: The siege of Etan.

A lot of scholars presume this to be Edinburgh, but it could also be  Edin’s Hall Broch, near Duns. If I am right, this shows how the Angles are beginning their push north again.

Allowing for the slight discrepancies in Irish annal-keeping, it is possible that these two battles are one & the same. Luith is clearly Lothian (feirn means land) while Fortenn (sometimes Fortriu) is essentially the Pictish world south of the Great Glen. The Roman writer, Ammianus Marcellinus, describes, ‘the Picts, divided into two tribes, called Dicalydones and Verturiones,’ from which passage we see the foundation of Fortrui in Verturiones. Fortriu naturally is the etymylogical root of Forth. Intetrstingly, at Doon Hill an Angle hall was erected c.650, which could be of significance.

After these events, in 681 Bishop Trumwine had established a Bishopric at Abercorn, near Falkirk, showing how the Angles had conquered the rest of East Lothian & beyond. The highwater mark of the invasion would come at Nechtansmere in 685, after which these fledgling sassanachs were slowly pushed back towards Berwickshire.

Was The Castles once called Mount Badon? Probably, but only a proper archeological dig would prove the matter. If it does, the site would take on elements of national dignity, for it was the place which first held the ‘English’ from conquering Northern Britain. Our island’s first historian, Gildas, in his ‘De Excidio et Conquestu Britanniae,’ after declaring the Anglo-Saxons had ‘dipped their red and savage tongue in the western ocean’ & assaulted Britain, & after a resistance had sprung up in response;

From that time, the citizens were sometimes victorious, sometimes the enemy, in order that the Lord, according to His wont, might try in this nation the Israel of to-day, whether it loves Him or not. This continued up to the year of the siege of Badon Hill (obsessionis Badonici montis), and of almost the last great slaughter inflicted upon the rascally crew.

2 thoughts on “Over Kidlaw / The Castles”