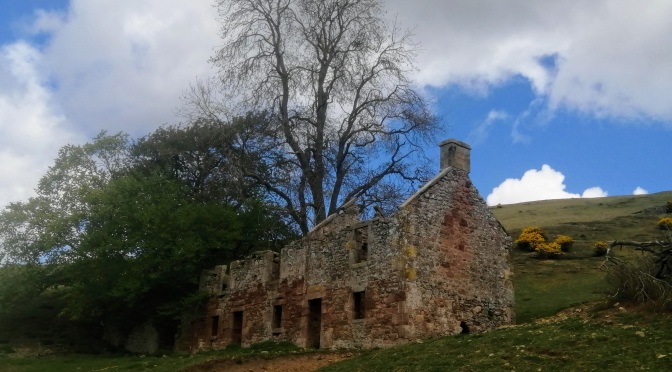 June is a time for colourful flowers coming into their best blooming, & also, it seems, in 2020, a marked increase in traffic on the roads & buses following the first easings of the boa constrictor lockdown in Scotland. People can finally go for a drive & a walk in more remote places without people slapping invasive notes on car windows… so where to go? 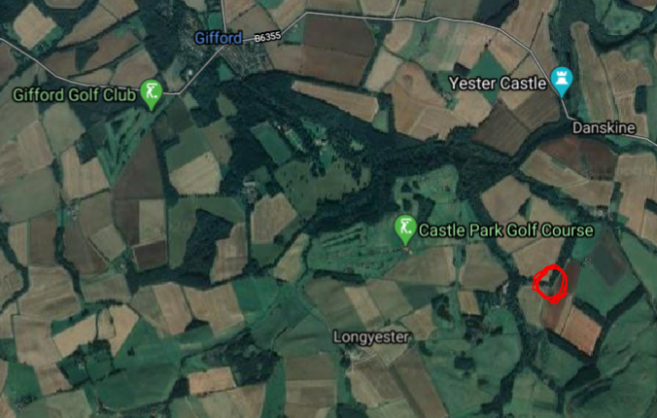 Well, there is this next walk, a real buffet treat of scenery & ruins & vasty vistas, revealing yet again how microcosmic East lothian is when appertaining to the rest of these islands.

Once you’re getting stuck into the hills behind Brookside Farm, you coud easily picture yourself in any of the savage, windswept peak-topp’d ranges of Britain. But I am getting ahead of myself a tad, & before we reach said scenery let us first take advantage of parking the car!

There is a 90 degree turn on the country road between Danskine/Newlands & Castle Park Golf Course where theres plenty of space to park the car.  You’ll immediately be struck by the highland scene to the west in which direction we’ll now be going. 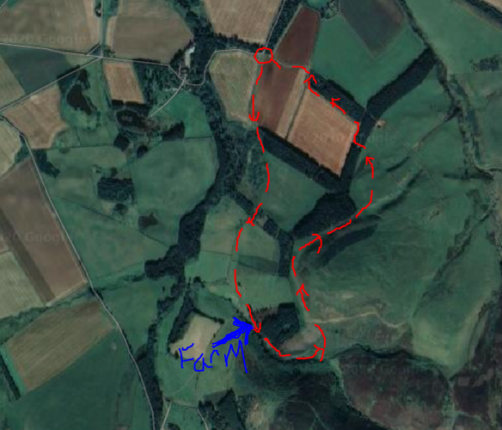 A farm track carries you nice & straight for a while, before you reach a gate – hop over this & enter the sloping sheeplands, meaning dogs on leads, or in Daisy’s case, my girlfriend’s arms. 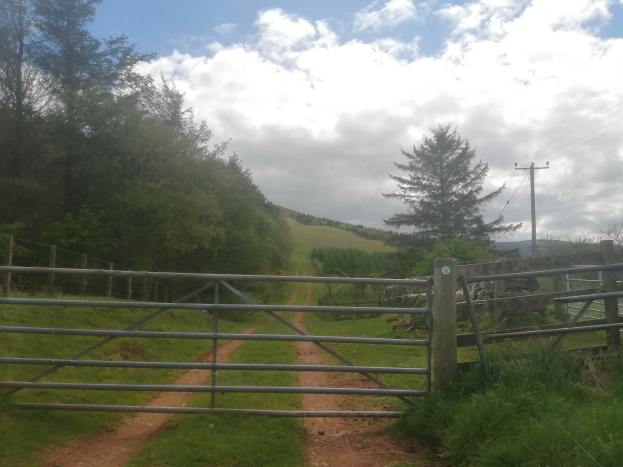 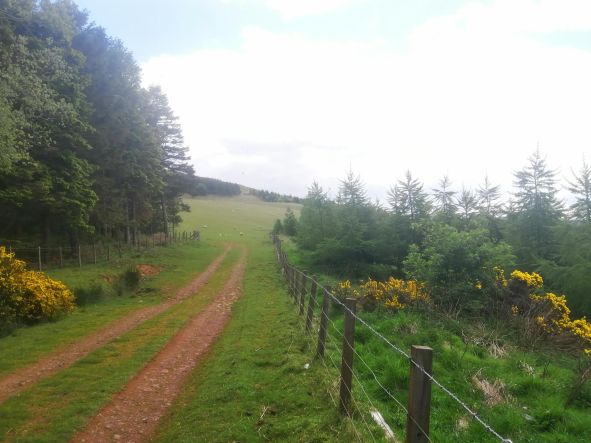 Continue west with the ‘tree farm’ on the right & the sheep scatterings on the left. As you traverse the big field you should pass a weird old iron farm machiney thing – don’t know what it once was (answers in the comments, please) but now its a great marker for the walk.

At the end of the field you’ll come to two sets of gates, like a lock system on a canal, which you should pass through. 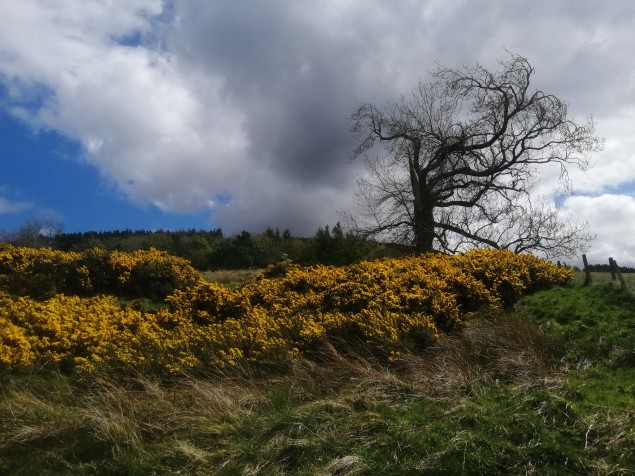 We are now in another field, sloping gently downwards in the direction of The Hopes – a wonderful walk we’ll get to in due course. 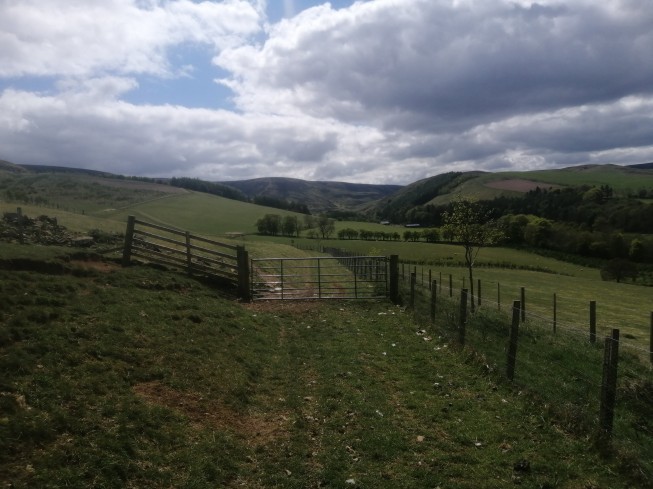 Half way along, hop over the fence & find youself on a track with the ruins of two farm buildings in the valley below – welcome to Brookside. 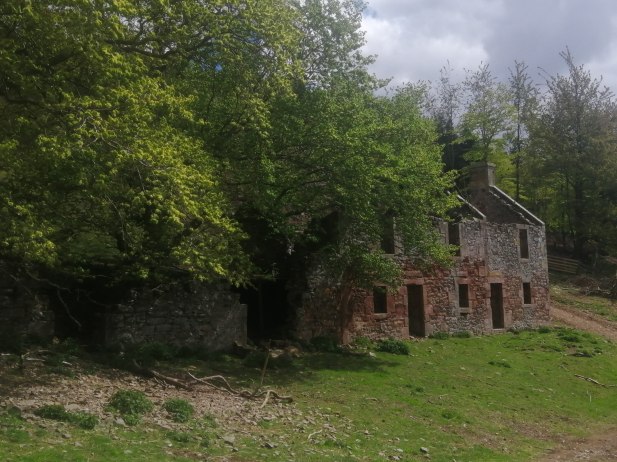 There are two ruins at Brookside, & the first one you come to is a hive of exploration, masonry & birdnest chimneys. The setting is serene & the scenery sublime. 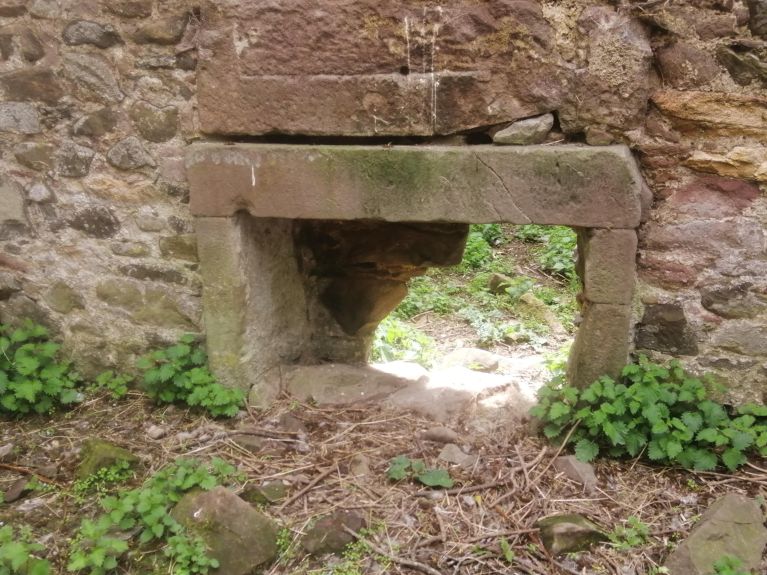 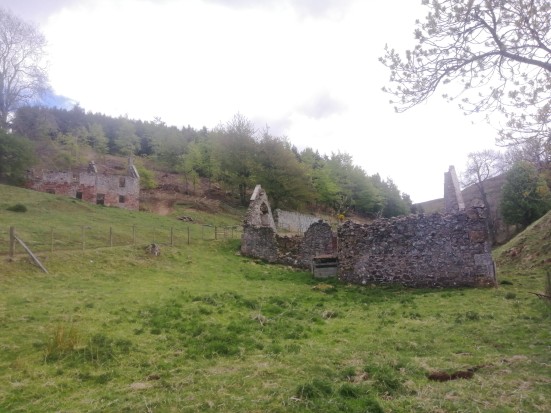 Brookside was once one of three farms – with East Hopes, West Hopes – that created the Hopes estate. There is a lovely old poster produced to publicise the sale by auction (roup) of over 1000 animals – the stock in hand on the farms of Snawdon and Brookside in 1813. It may have been prompted by a change of lease, retirement, or even sequestration. The farms had probably been worked in tandem, with Brookside deeper into the Lammermuir Hills being used for pasturage.

A mixed husbandry was practised by a band of East Lothian’s upland farms along the east-west line of the Lammermuir foothills. The higher ground was used for grazing and the better lower ground for arable and fodder crops. This pattern was well established by 1813, as the poster reveals.

The walk now carries on up into the hills behind Brookside, following the very brook on which side the  farmhouse is built. We’re not the first ‘out yonder uns’ to tread these paths. In his Reminiscences of the Royal Burgh of Haddington and Old East Lothian Agriculturists (1883) John Martine mentions in a chapter on the ‘Old Camps’ of the county, some of which we explored along the Gododdin Heritage Trail. Look out for some really interesting local colour alongside acute & warm accounts of the old farmers. One of them, David Darling, delighted in showing visitors the historical heritage of the spot, in the same way I’m buzzing off showing this wonderful ruin to the walkers of the East Lothian & beyond. It really is a treat. Martine says;

ON the East Lothian side of the Lammermuir range of hills, from Nether Brotherstones on the west, to Priestlaw on the south-east, there are upwards of twenty old camps or hill forts. The positions of them are marked in Forrest’s excellent map of Haddingtonshire, published in 1799, and now scarce. They are to be found at Upper and Nether Brotherstones, West Hopes, Brookside, Longnewton, Kidlaw, Longyester, Park Hill, Whitecastlenick, Kinisidenick, Kilmadie Burn, Priestlaw, Penshiel, Garvald, &c. They number twenty-one in all. They are all circular or oval, and perched on the tops of hills and lofty eminences, and different from Roman camps, which were square or longitudinal. They have rings, or mounds of stones and earth, or circumvallations, with corresponding ditches around them. Formed at a very early date in the history of the country as places of defence or habitation,

It is the purpose of the writer to notice two of these camps or hill forts, which are on the farm of Brookside, in the parish of Garvald, on the Hopes estate. Placed on the top of a conical hill of moderate height, the one towards the south side is the larger of the two, and on a higher elevation. It has five circular rings formed of gravel and soil around it quite distinct, especially on the north side, with ditches and several entries through them to the centre of the camp, which are still discernible. The centre occupies a large space of fine pasture grass. The south side of the hill is precipitous and rugged, and would be found difficult to an enemy to ascend if opposed. At the bottom is a pretty valley, with a mountain brook running through it. The hillsides and valley are clothed with juniper bushes, mountain ashes, scrubby saughs, &c. Looking down from the hill-top, the valley or glen is of singular beauty. There is a most magnificent view to the north and west of the lower parts of East Lothian, the Firth of Forth, with its islands of Fidra, Eyebroughy, the Lamb, Craigleith, and the Bass; Fife, Pentland Hills, Arthur’s Seat, &c. The fatigue of travelling and climbing the hill is amply repaid by the splendid view.

The other camp to the north, and nearer Brookside, is similar, but much smaller. Mr David Darling, who with his father farmed Brookside for forty or fifty years, and who lately retired from it, was most kind and hospitable to visitors, and. took much delight in telling his friends about the camps, &c. Stone arrow-heads, hatchets, with lots of human bones, relics of former days, have been found from time to time, and no doubt many more may be found, if search were made for them. The sheep and lambs, fond of basking and lying under the banks of the rings, which they have in many places rubbed bare, point out the fact of the artificial formation of these mounds or rings, which have been originally formed of rounded stones and gravel.

The wildest part of the Lammermuir Hills is at Brookside and on the adjoining farm of West Hopes. A more enchanting spot in a fine summer day is perhaps not to be found in the county of East Lothian. From Hopes Bridge, looking up the beautiful glen, with Lammer Law in the distance, the view is uncommonly fine. In the month of July, when the bell heather is in full and splendid bloom on the hill sides and tops, a day’s ramble among the Lammermuirs will, to a lover of wild and beautiful natural scenery, afford much delight; and when he comes to view the camps of Brookside, if he is of a contemplative mind, he will wonder how the old inhabitants of this land could live in their hill-forts, clothed in skins of wild beasts, and depending for their daily food on the chase and slaughter of wild animals and birds, while resisting the attacks of their enemies with slings, bows and arrows, and flint-headed javelins.

The counterpart of such a state of life in the hills and mountains of Scotland at that time may at this day, perhaps, be found, but on a much more extensive scale, in the mountainous country and savage tribes of Afghanistan or Zululand. The late Hugh Miller once visited the old camps at Brookside, and was much impressed with the wildness and grandeur of the scenery, which he took notice of in a lecture he delivered in the Free Church of Yester. He went fully into the geological history of the formation of the Lammermuirs, &c., with notice of the granite on Faseny Water, &c. The lecture was intensely interesting.

At one time a heronry existed in a clump of large trees above Brookside steading. Mr David Darling’s respected father had a peculiar notion about the herons and the state of the weather. When the birds took it into their heads to fly down the burn of Brookside, he cried, shouted, and hounded them up again, thinking that when they came down there would be bad weather, and if again they fled up the burn there would be fine weather. Hill farmers and shepherds are good observants of such instincts of birds and animals. In no part of Lammermuir does the snow, after a severe winter, lie so long as on the hills and in the gullies and scars of Brookside, and the West Hopes. Often far on in June have patches of hardened snow been seen on the hill-sides there. Energetic boys from Gifford, &c., on a holiday have often gone up in gangs to the hills and scattered the snow, declaring it was a terrible thing to see snow lying on the hills in the warm month of June.

In the excellent ‘Garvald, the History of an East Lothian Parish’ by Irene Anderson MBE – which you can read in full here – we can read a little more about David Darling.

Throughout that time the schoolmaster, William McGregor, was also the session clerk. William was schoolmaster from 1845 until 1876. Two other long-serving elders were Robert Taylor of Carfrae and David Darling of Brookside, both life renters on Tweeddale land. Both these men succeeded their fathers on the same farm…. There are still considerable ruins of the house at Brookside but it is difficult to imagine how such a small acreage of land could have supported men of such standing. David Darling must have been a very committed elder because it is about eight miles across country to Garvald and he regularly attended the session meetings! 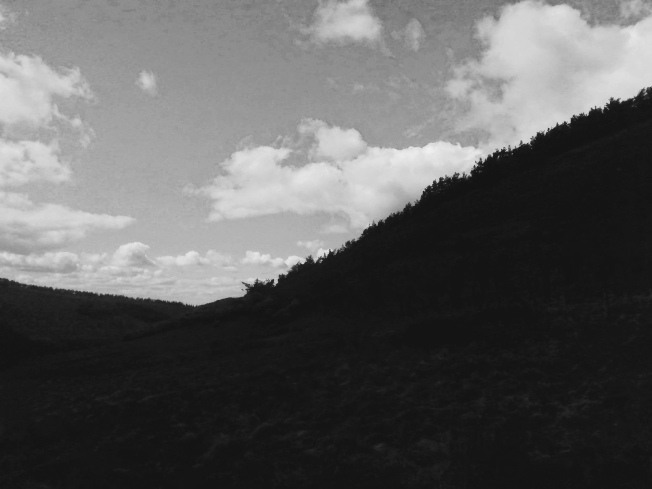 We are now entering open countryside – apart from the huge flanking heaps of Lammermuirs of course. On the right is the conical hill with the forts – I wasn’t in the mood for exploring them on this day, but of course they’re fair game for anyone in the vicinity. Eventually, on the left, you’ll come to the gate in the picture below – take it & head up the slopes. 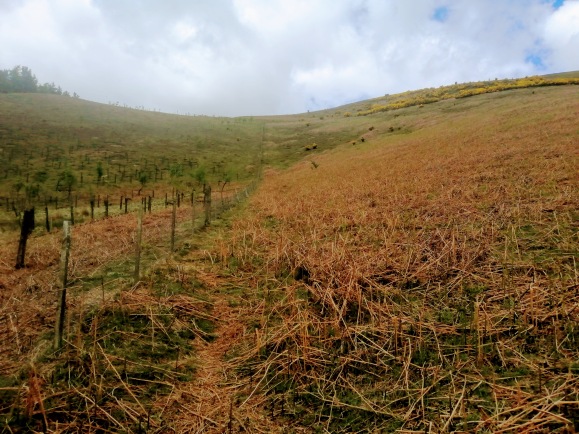 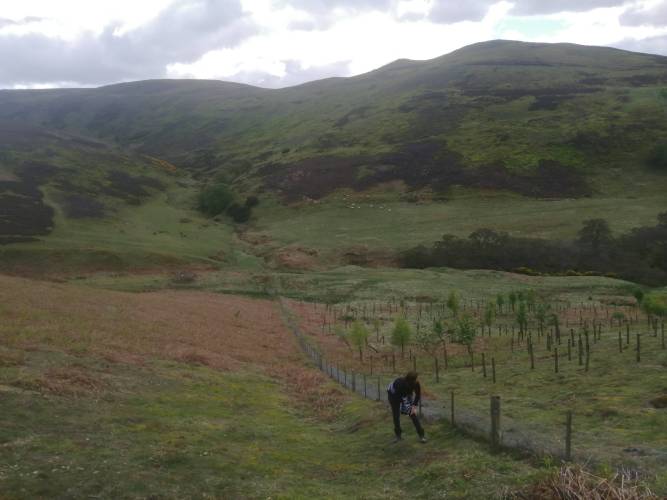 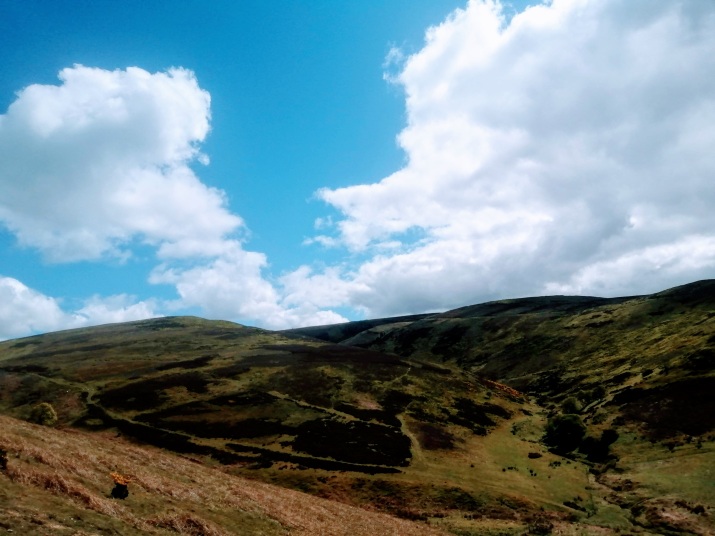 At the top of the slope, start heading east – skirting the fence & passing a couple of impressive mounds which might even be tumuli connected to the Battle of Badon (read more here). They are sited less than a mile & a half to Dun Badon (The Castles) & the phraseology of Nenniu’s ‘Arthur penetrated to the hill of Badon ,’ implies a defence system in the foothills of Lammer Law. 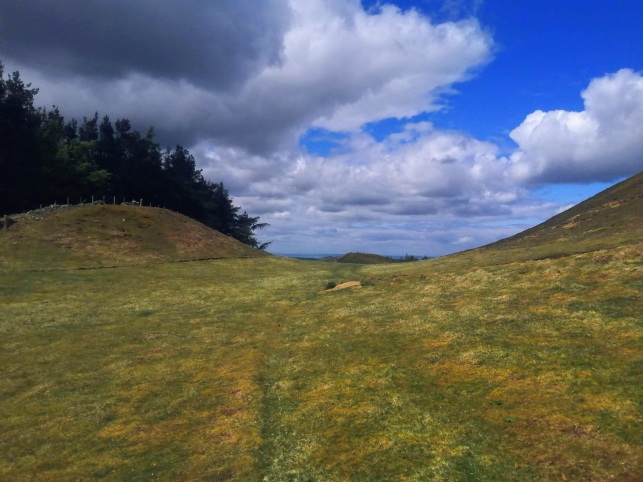 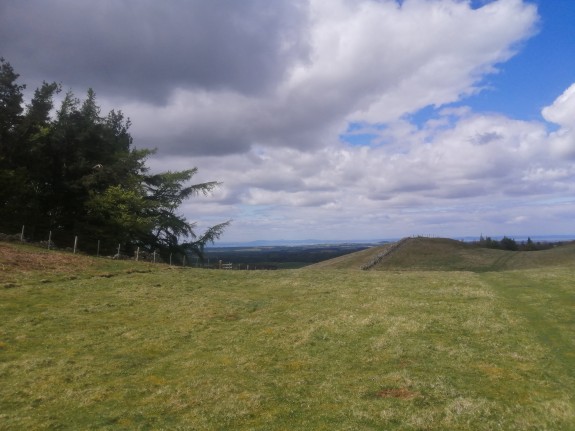 Just beyond the tumuli the view opens up & it really is worth it – East Lothian in its prime & in its glory is a sensational aesthetic. You can even trace most of previous Walking East Lothian paths from here, over a picnic & a spritzer. 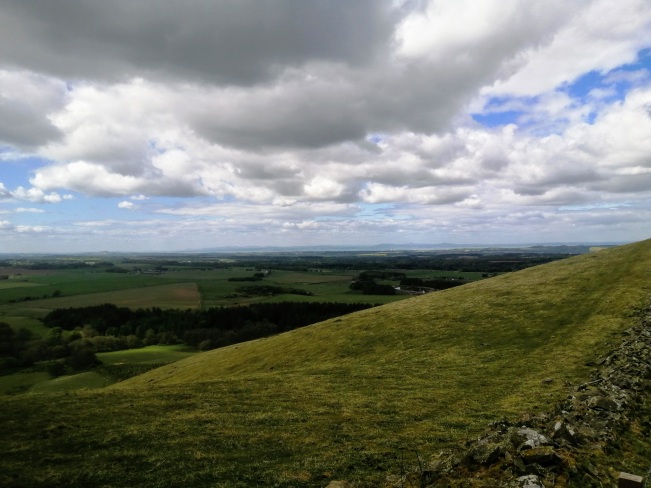 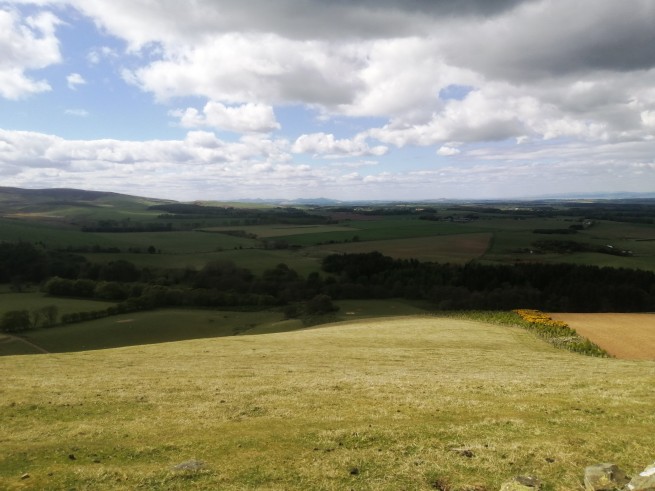 So its time to get back to the car. Simply follow the path to a gate, enter a massive field & veer forward left to a gate in the middle of a treeline. 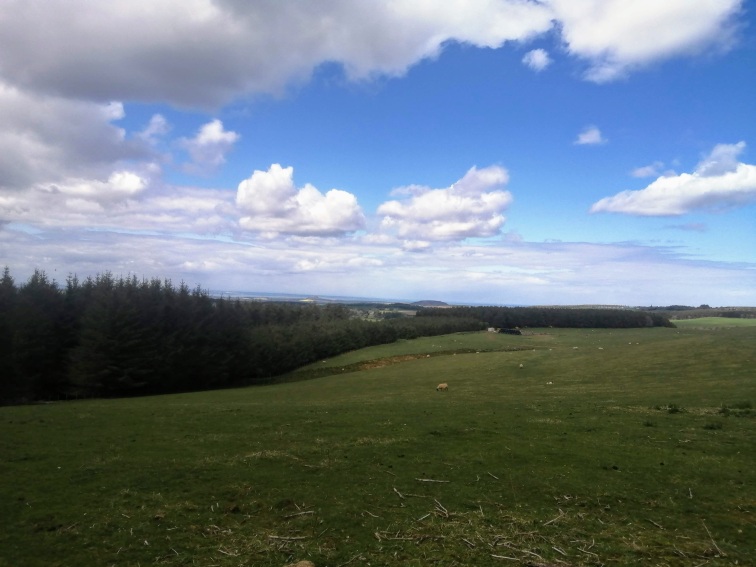 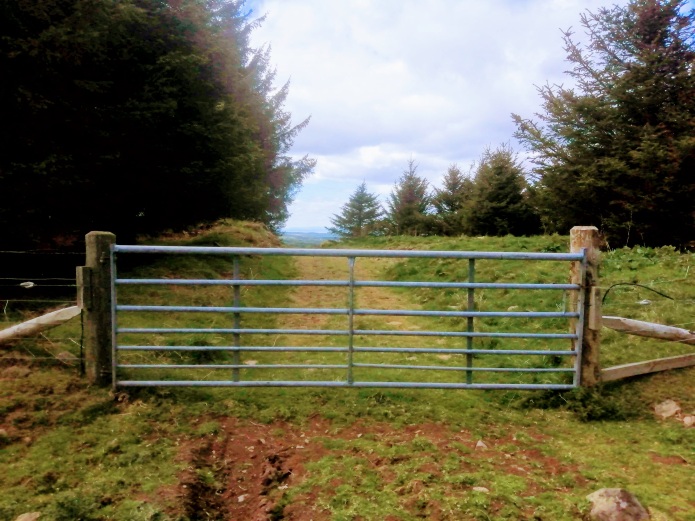 Over the fate you follow a track a wee while til it opens up into a large field. Turn right & just meander back to the car. Its a good way still but pleasant & spacious & airy. 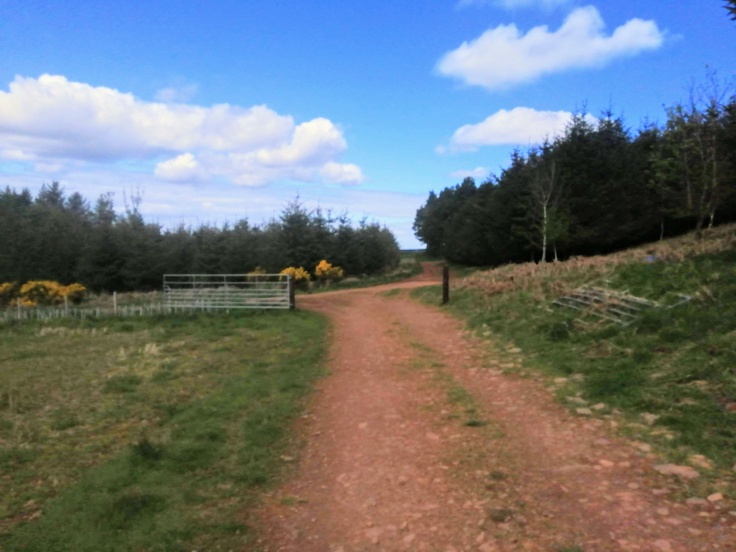 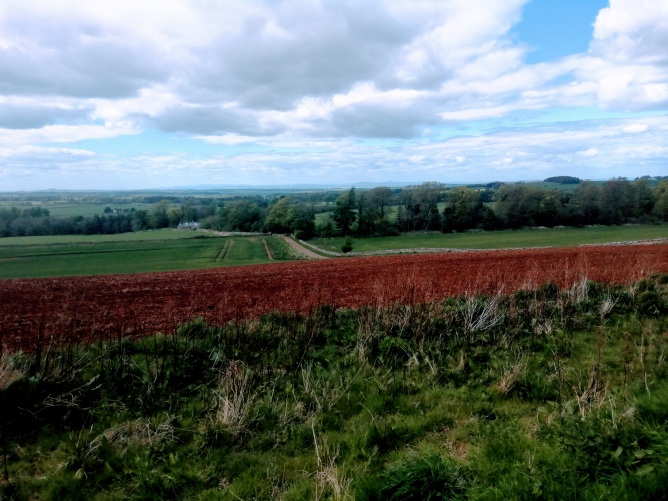 One thought on “Brookside Farm”