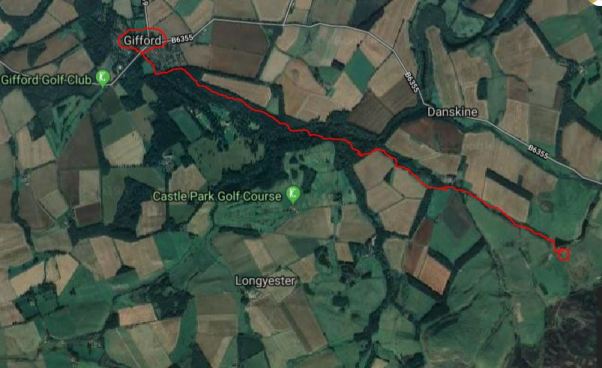 This next leg of the Gododdin Heritage Trail sees us heading downslope in the direction of Haddington, in order to close the circuit. As one descends, the views are sent divinely searing into the distance & the Pentlands, Fife, Edinburgh, etc. This is the chief reason that it’s better to do the walk clockwise I feel.

We were last at Green Castle, popping into the café at Tweeddale Millennium fisheries for a pee & a brew. To continue the Trail find the far western corner of the westermost of the three fishing lochs. You should then find yourself at a grassy track leading to a gate. Head this way. 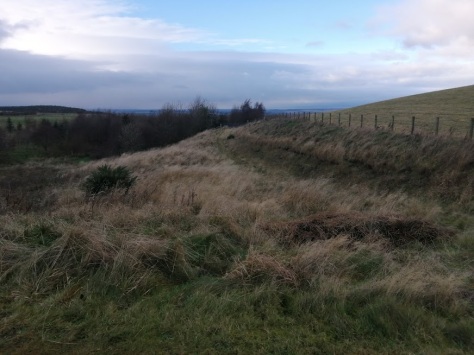 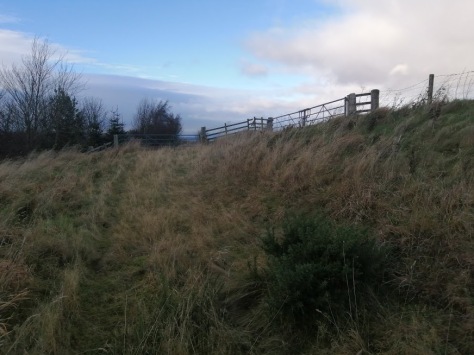 Over the gate, if you like to explore (outwith shooting season), a gate on the right leads to the excellent remains of Black Castle, which I looked at last April. This fort is quite large – bigger than White & Green Castles – & I believe it was the main settlement of a certain Serguan, from which we get Danskine after the ‘Dun’ of Serguan. This guy’s name does not appear in Y Gododdin, but in the Harleian genealogies, & specifically the Welsh kingdom of Ceredigion, we may observe;

Cunedda was famous for leaving Lothian (Manau Gododdin) as given in the following passage in The Historia Brittonum of Nennius as .

Maelgwn, the great king, was reigning among the Britons in the region of Gwynedd, for his ancestor, Cunedag, with his sons, whose number was eight, had come previously from the northern part, that is from the region which is called Manaw Gododdin, one hundred and forty-six years before Maelgwn reigned. And with great slaughter they drove out from those regions the Scotti who never returned again to inhabit them.

Cunedda, you’d be interested to hear, was the grandfather of King Arthur. We begin with the eevidence for the Pictish matrilineal succession as stated by Bede, who tells us;

Now the Picts had no wives, and asked them of the Scots; who would not consent to grant them upon any other terms, than that when any difficulty should arise, they should choose a king from the female royal race rather than from the male: which custom, as is well known, has been observed among the Picts to this day.

According to the Jesus College genealogies, Cunedda Wledig had two daughters, Tegid and Gwen. The latter then marries a certain Amlawdd Wledig, so the matrinlineal Pictish royal line should flow through their children. Another genealogy in Peniarth MS 177 shows their daughter to be a certain Eigr, otherwise known as Eigyr, Igraine or Ygerne. This woman, of course, is the father of King Arthur & appears in the Pictish king list as Gygurnus mother of Garthnach.

The only conclusion we can make now is that Cunedda was King Arthur’s great grandfather & that if Im correct about Danskine being the home of Serguan, then Arthur’s great uncle was an East Lothian boy! 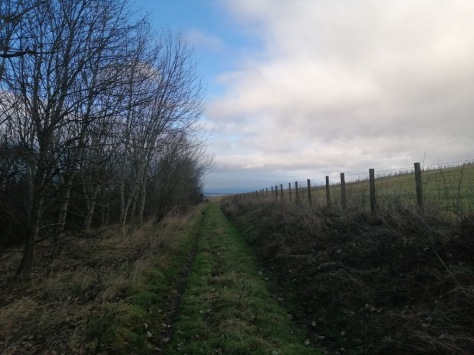 Returning from that historical digression, if we continue along the track for a very pleasant half a mile, you eventually come to a wee mini-hamlet about Newlands Farm. Here turn left along the tarmac road.

After a bend the road opens out into a long straight, which you should follow to the end. At this point Lammer Law rises up in the distance beyond gorgeously opening fields. Here, turn sharp right into the field & head along the field-fringe towards the trees in the far distance. These fine specimens belong to Yester Estate, at the other side of which lies the village of Gifford. 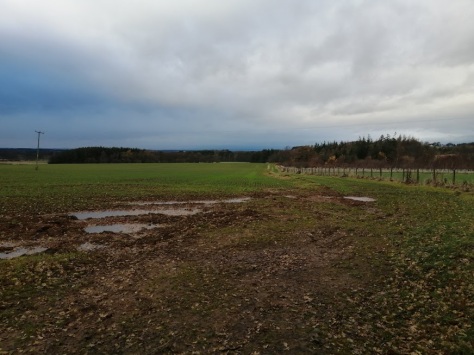 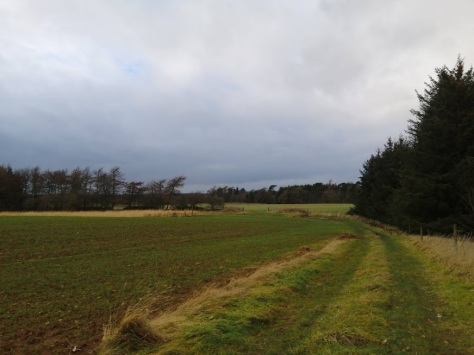 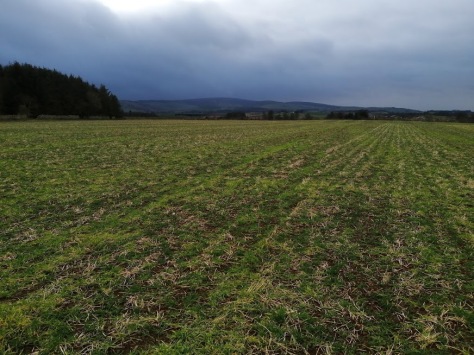 Once you reach the treeline you will see a broken wall, which you should pass through & into the splendid forest of Yester. The rough idea is to step through the wild & feral woods along a fading trail about 20 metres parallel to the wall until you reach the corner of an old bird pen.

Carrying on in the same direction as before, with the fence hard on your right, you will come to the next corner. Here again carry on & you will eventually reach a main path. 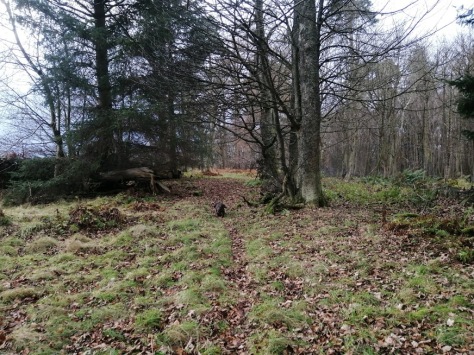 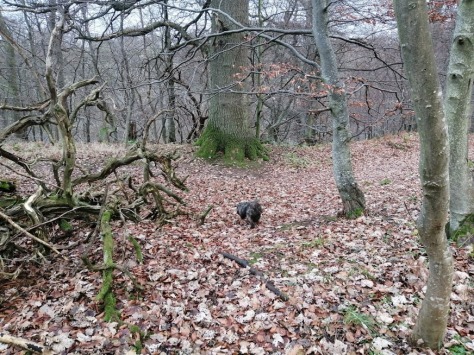 We’ve traversed this very ground before on the search for the Goblin Ha.‘ Today we’re turning right, descending down the ridiculously muddy path & over the rickety bridge. Reaching the main Yester path, turn left & imagine Daniel Defohere on his Grand Tour of Great Britain, who recorded his visit with the following ;

Here we turn’d out of the way to see the Marquess of Tweedal’s fine park, and which is, indeed, the main thing, his fine planting at Yester, or, as Antiquity calls it, Zester;

The old Earl of Tweedale, who was a great favourite of King Charles II. tho’ not much concern’d in politic affairs, at least, not in England, yet took in from the king the love of managing what we call forest trees, and making fine vistas and avenues: The very first year after the Restoration the king laid out, with his own hand, the planting of Greenwich and St. James’s parks, and several others, and the said earl had seen them, and was extremely delighted with the method.

This occasion’d his lordship, as soon as he went down into Scotland, to lay out the plan and design of all those noble walks and woods of trees, or, as it might be call’d, forests of trees, which he afterwards saw planted, and of which a gentleman, whose judgment I cannot doubt, told me, that if ever those trees came to be worth but six pence a tree, they would be of more value than the fee simple of that estate; not meaning by that estate the land they grow on, but the whole paternal estate of the family: Nor is it unlikely, if it be true, that his lordship, and his immediate successor, planted above 6,000 acres of land all full of firr-trees; and that, where-ever it was found that any tree fail’d, they were constantly renew’d the next year. 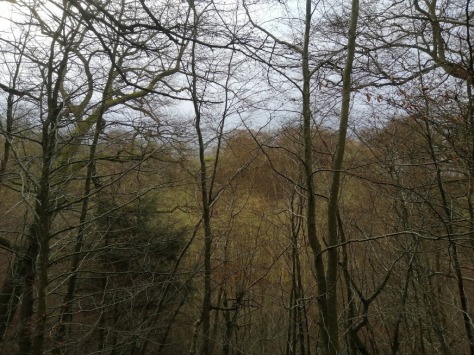 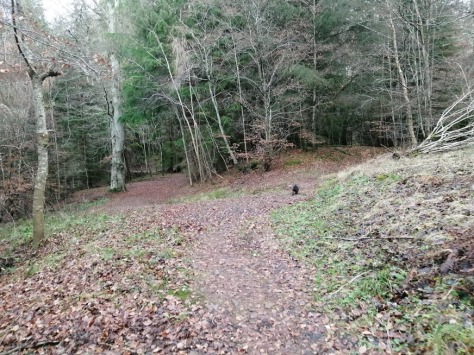 What follows now is an extremely pleasant amble through Yester Estate. First up is a series of bridges & real-life  moving water pastoral paintings on ether side of them. Quite wonderful! Then the path rises to the right somewhat & sends you cruising through splendid avenues of forestry until you reach something of a path T-Junction on the very edges of Gifford. Here turn left & drop down towards a gate which takes you into the serene streets of Gifford proper. 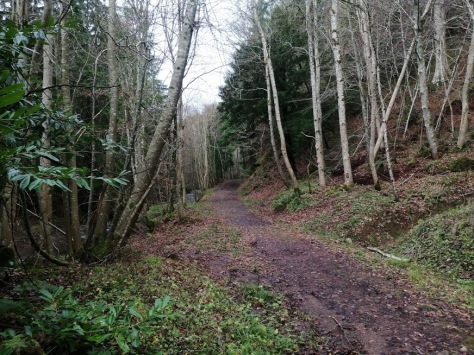 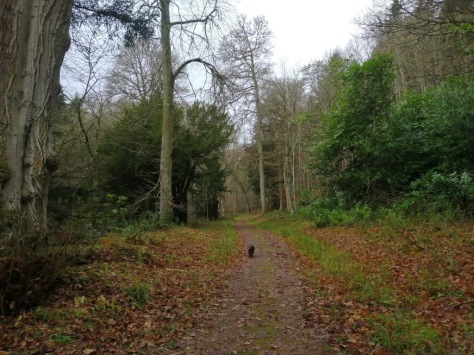 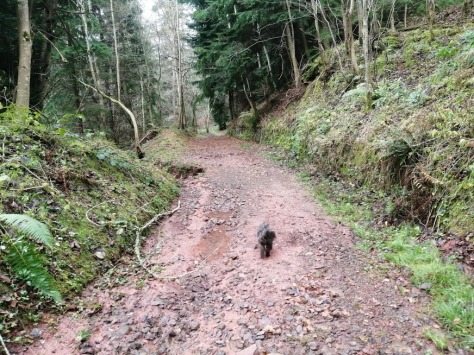 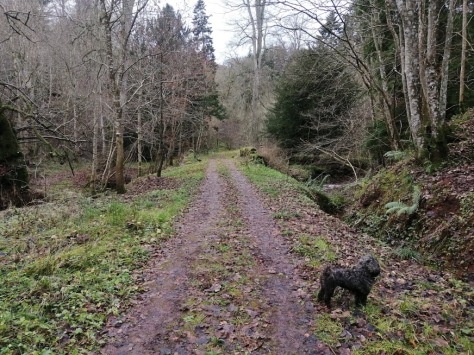 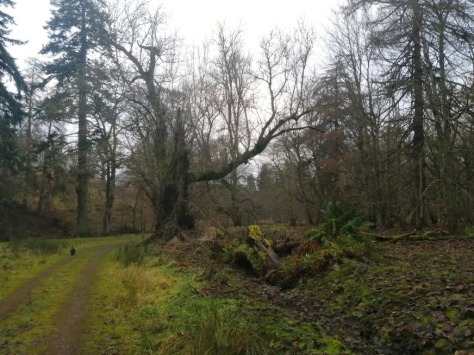 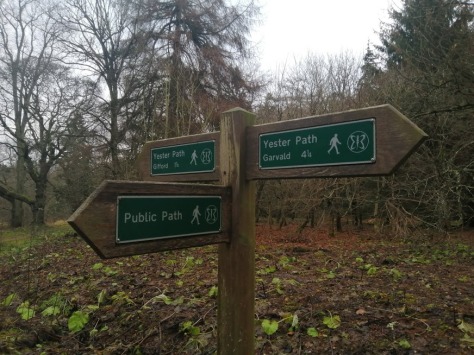 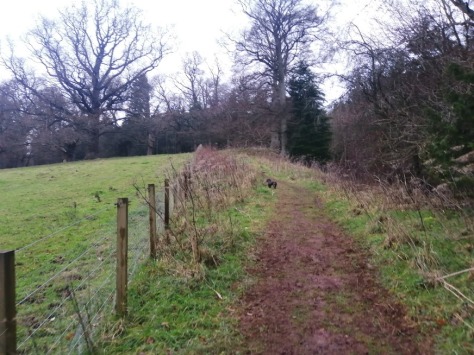 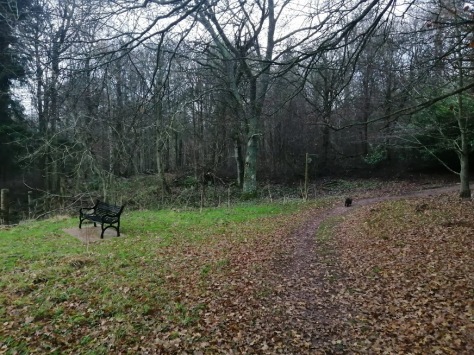 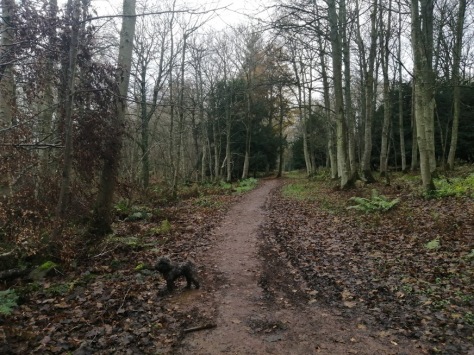 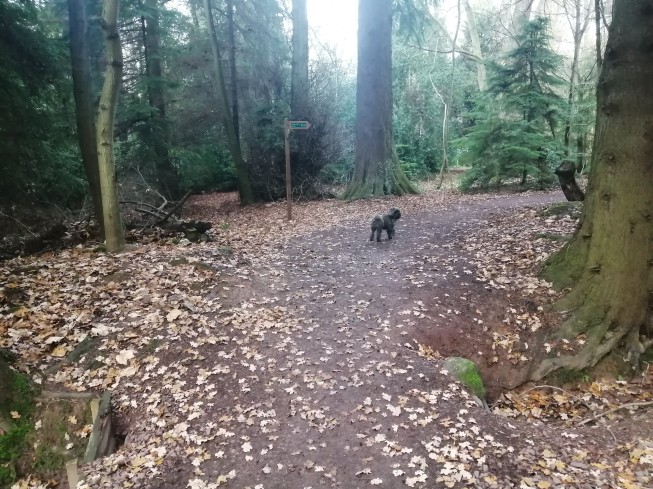 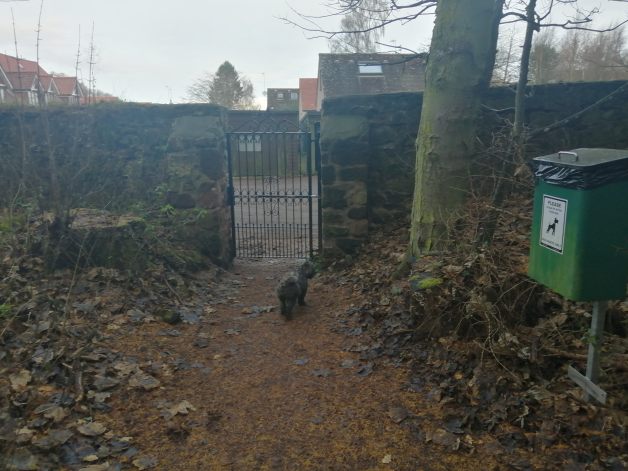 After about 40 metres theres a ginnel (thats a Lancashire word_ to the left which leads you into the magnificent greenerie of Gifford’s public park. This is lined on your right by a Portmeirion style array procession of houses. In the 17th century a large estate and farming community flourished after the first Marquess of Tweeddale had enclosed the Yester Estate with a 7 mile wall and laid out a park within it. He demolished the old settlement of Bothans which lay near his house, and the village grew outside the gates to accommodate estate workers. 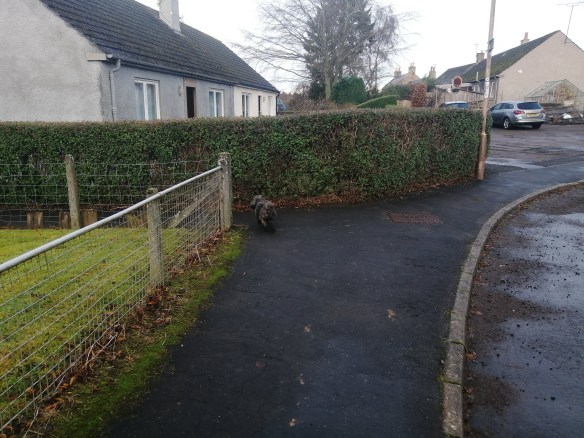 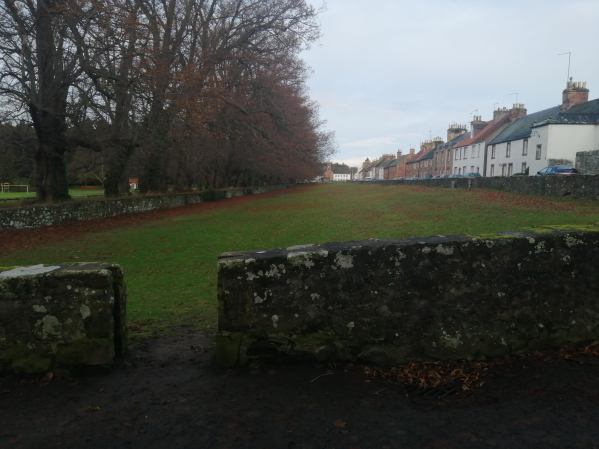 For those traversing the Trail Gifford is an amazing port of call. There’s two hotels, a brilliant uberfriendly newsagent, a co-op, a deli AND a cafe. I know I said earlier that its best to go clockwise, but anticlockwise works as well & Gifford could work a bit like base camp for Everest.

It is also possible to get to Gifford by bus from Haddington & Pencaitland – its a circular route. So hypethetically teh pedestrian citydweller can catch a bus to either East Linton or Gifford in the morning,  then hike up into the hills to the other village & catch the bus home! 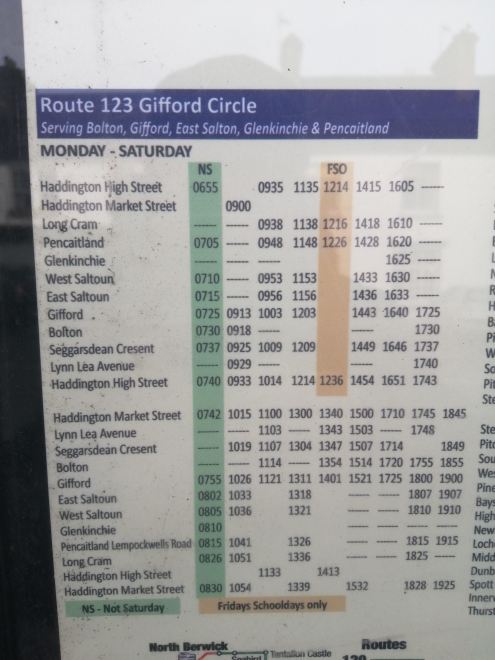