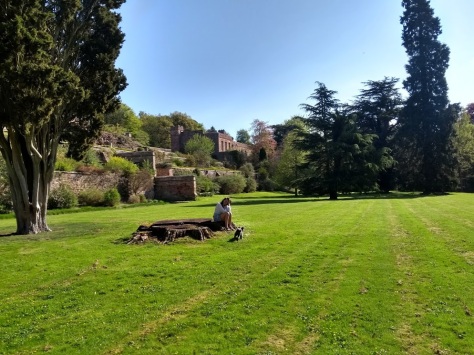 OMG, what a lovely spell of weather. May in Scotland is perhaps the best month, before the European monsoon season sweeps in thro’ June, & then the sporadic cold spells during August & July intermittently frustrating our happy plans at summer fun. I love this time of Spring as well, for in the short space of about two weeks everything flourishes into green. Not the dull evergreen green, but like a laser-beam green which startles the eye & shakes the dormant spirit into life

In my world, the young Daisy has been coming to terms with the morning chorus, jigging her head from side to side with a wee bark as the birds call & answer. Very cute, like a toddler listening to the first Stone Roses album for the first time. 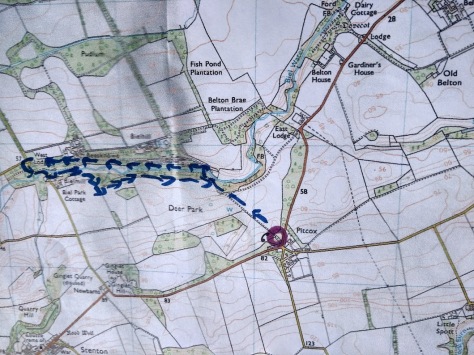 So to the walk. We had the pleasure of the wife’s company, with whom I chatted gaily as we drove to Pitcox, a tiny hamlet a few miles inland between Dunbar & Stenton. Due north of the charming civic center of a signpost & phonebox, there is a gateway that veers to the left while the main road to Dunbar drops downhill. One should drive through the gateway, where about 50 yards later there’s a nice space to park up. 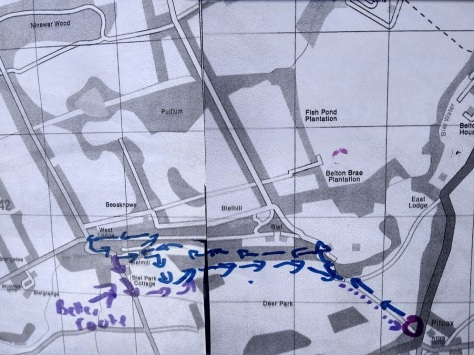 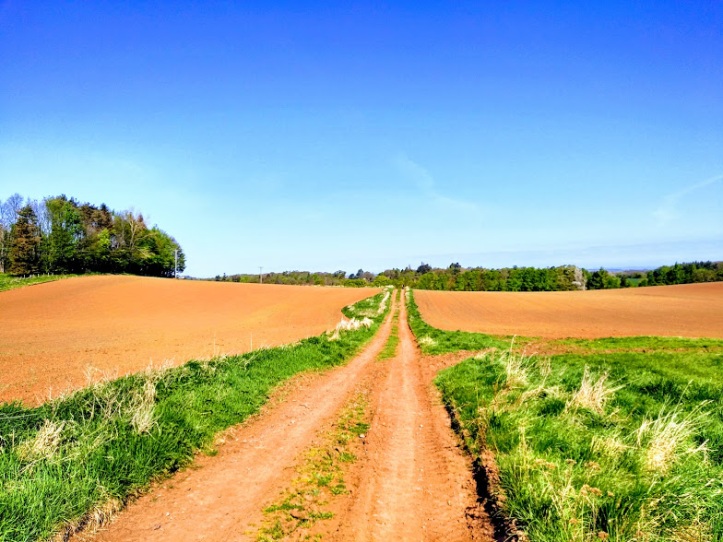 We were now in Biel Estate, one of the secret enclaves which make this county such a joy to explore.  A red dust track leads gently downhill through rather large fields, dappling in chiaroscuro, along which two cyclists rattled in that WW2 Boneshaker kinda way. After some distance the track then splits into two, with the left fork being our preferr’d choice. 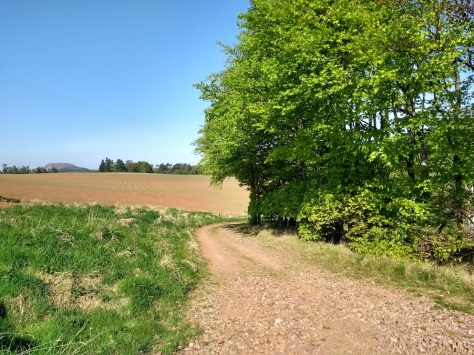 We were now heading downhill. To our left the fields stretched gloriously,  while on our right rippl’d a half-wooded area. The weather was warm, like walking about in a cozy duvet at a festival. Me & the wife were chatting about nature as we went, as if she were Dorothy Wordsworth & I her brother in the Quantocks, 1797.

We came to a decaying & overgrown wall & half-road, the back-door to Biel so to speak. The road soon got better & became a bridge over the Biel Water. This river runs for 4.5 kilometres from the Luggate Burn and the Whittinghame Water, via Stenton, Biel House, West Barns, and finally to Belhaven Bay with its rather unusual bridge. 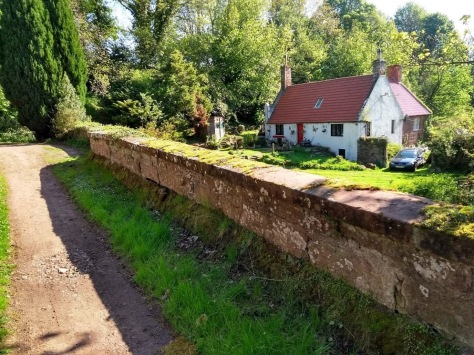 Back in Biel, crossing the bridge brings up a quaint cottage on the right. At this point one should head in the direction of the cottage, then take a sharp right through a gate under the bridge.

We were now in the Biel back garden. Keeping the water to our left, we proceeded through a glossy green area, chimney’d by excellently massive trees & back’d by the majestic Biel House. Trees included a Lebanon Cedar, a Cedrus Atlantica from the Atlas Mountains of North Africa, & several flourishing Wellingtonias. There was even an example of the local ‘Eucalyptus Whittingehamensis,’ while wooden magic psilocybin mushrooms seem’d a testament to the new owners’ partying habits, perhaps. 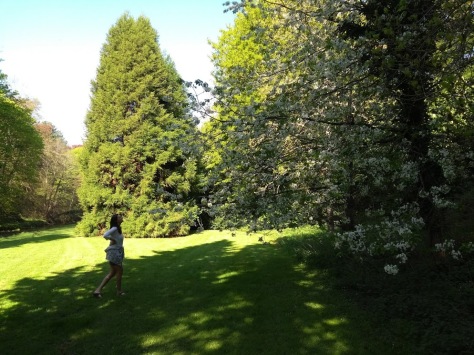 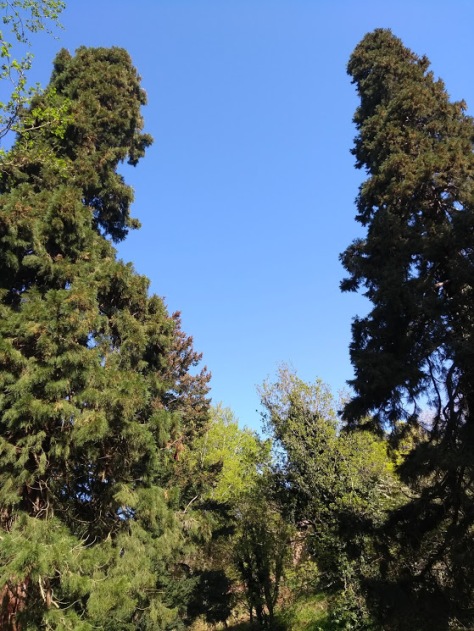 Biel House today is in the hands of the Spence family.  In the 12th century the lands of Biel were part of the extensive etstates of the Earls of Dunbar. By the 14th century we then hear of a ‘fortalice’ at Biel, which was incorporated into the the present 16th century listed mansion. It is thought that the great medieval makar, William Dunbar, was born into the Biel branch of the Dunbars.

William entered St Andrew’s university whilst aged around 10 in 1475 to take his MA. In those days this level of education was roughly equivalent to that of secondary schools today. Thereafter he became a Franciscan novice and visited every flourishing town from Berwick down to the Kent coast and in the process preached at Dernton and Canterbury. He crossed from Dover to the then Picardy, to instruct, where possible, its denizens. He also ventured a good deal further West. He became an ambassadorial secretary for James IV carrying out diplomatic missions.

At the turn of the sixteenth century he earned £10 as a salaried court poet which rose to £80 by 1510. Dunbar also made marital arrangements for James IV with his English wife-to-be. In 1503 he penned the sparkling political allegory “The Thrissil and the Rois (The English rose Margaret and the thistle James). In 1508, 7 of his poems were printed for what was the earliest example of Scottish typography. In the train of Queen Margaret he visited Aberdeen in 1511. He disappeared within a few years – whether he fell at Flodden Field is a matter of conjecture. In his famous poem, The Flyting of Dunbar and Kennedie, Dunbar states he possesses, ‘ane pair of Lowthiane hippis.’ A sample of the same poem reads;

For a couple of centuries Biel pass’d through several notable & noble hands. Sir Robert Lauder of the Bass possessed them; as did the the Earl of Melrose; then Sir John Hamilton, later Baron of Belhaven & Stenton. John also published a book in 1723 called, ‘The Countryman’s Rudiments, or An Advice to the Farmers in East Lothian how to Labour & Improve their Ground.’

The Biel House we see today was remodeled in Gothic style in the 19th century, & through Historic Scotland is open to the public on request. This indirectly led to an incident a couple of years ago, when thieves broke in & stole thousands of pounds worth of African artefacts & historical weaponry. Among the latter were remarkable pieces seized from pirates who had infested the coasts of the Malaysian state of Sarawak in the 1860s. Of the 2016 theft, The Edinburgh Evening News wrote:

Items from a rare collection of historical artefacts were targeted, including ancient objects from Africa, mounted animal heads, swords, daggers, spears and arrows. Police are asking anyone who was in the area at the time or who has been offered any of these items for sale, to contact them. Owner Charlie Spence said the items were likely to have been stolen to order. At least two thieves prised open shuttered windows, bypassed an alarm system and went up a spiral staircase to the museum in the fifth floor of the mansion’s tower. The break-in was discovered by workmen who spotted lights on inside the tower the following morning. Mr Spence, 67, whose father bought the property in 1956, said: “These items were targeted, taken to order. They knew exactly what they were doing. “They got through a window where the shutter was shut, with a steel bar across it. They even bypassed an alarm. “They took African artefacts, spears, arrowheads and a whole bunch of swords, not necessarily African. There were all kinds of swords and cutlasses, some with saws on the reverse to slash and hack through the bush. “There were a lot of ‘antlers’ – horns and skulls – on the wall. All the indigenous species they ignored but all the exotic African animals was taken. Things with great grisly horns, some may be extinct.

“They are completely unique. They were collected by previous owners, but we have been custodians since 1956. They just ignored other things.” Mr Spence said the theft would have been carried out by “at least two people”. He admitted it was possible that the suspects had previously toured the property, which is open to visitors only by written appointment. He added: “They had knowledge of the house. They knew the lay of the land very well because it’s a very difficult room to get to. It’s on the fifth floor of the tower – you’d have to know where you were going. You also have to go up a spiral staircase, which has just had lights fitted. The lights were left on the next morning.” Mr Spence said he was not at home when the break-in happened. Police Constable Karen Hamilton said: “These artefacts have been in the museum at Biel House for many years and we are keen to make sure these are returned to where they belong.”

What is interesting here is that historical karma seems to have kicked in. In Volume II, Part III, of the East Lothian Antiquarian & Field Naturalists Society ‘Transactions, (1931-33)’ we read of the Society’s field trip to Biel House in which the Imperialist ‘loot’ of foreign treasures is mentioned without opinion, & normalised before the reader. In an ideal world, whomever stole the ‘African Treasures’ in 2016 were actually trying to return the stolen property to their rightful owners.

Amongst objects of interest in the dining-room a piece of jade was noted, all, including its handles, carved into one piece. It was in the Summer Palace of Pekin when that famous repository of priceless objects of art was looted for the first time in its existence in the year 1860… A picture of great interest is that showing Aloysius or Luigi di Goganza (the patron Saint of Schools) casting away his crown, in response to a vision in order to devote his life to the priesthood & the service of others. Colonel Grant explained that it was one of Napoleon’s pieces of loot & at one time hung in the Louvre. 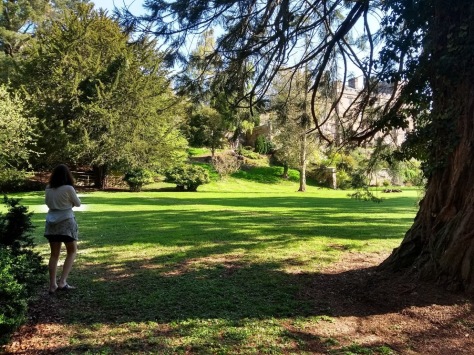 After enjoying the sun & the overgrown, unkempt Tuscan terraces of Biel’s formal garden, the wife & I continued our walk, taking one last glance at the house to stir the soul. We were now in woodland – Wild Garlic Woods I’d like to call them. Chomping on a customary leaf, & continuing on, we were joined by a wee road dropping into ours from the direction of Biel House. A few more footsteps & we had stepped out into an open expanse in a blaze of sunshine.

Just beyond a tall fir with candleflame-tips, we came across a mown piece of pathway by the river, which we followed. This was a romantic stretch indeed, & we started making love-heart shadow art. 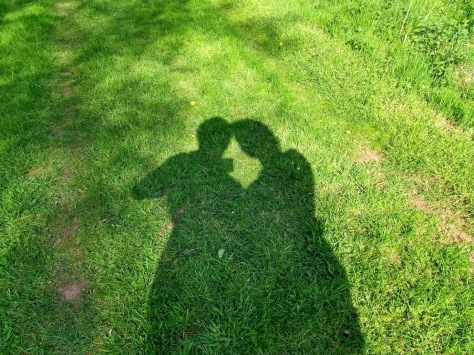 We then came to a spacious area; the flash of deer, a badminton net & a bench.  It felt perfect to be beside the river on such a perfect day. But we had to keep going, of course, & on re-entering woodland came to another junction, turning back-right on ourselves up to a long straight road. Turn left here.

After ‘a lovely stretch for a bicycle ride‘ (the wife),  we came to West Lodge & departed the estate onto the main road. Turning left, we chicaned through immense forestry, over a road-bridge & into a charming pocket of cottages. At this point I led the wife & I back along the banks of the river, passing Biel Mill in the process. As we were treading a path through blossoming bushes I’m like to the wife – who was sniffing the blossoms as we skipped – ‘darling, this is great.’ 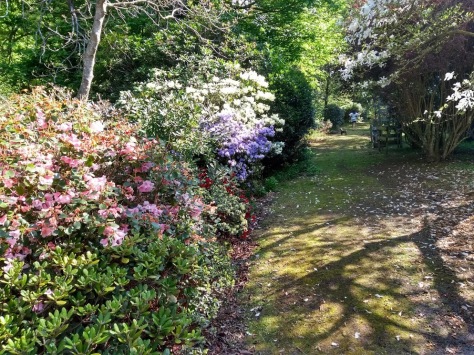 But it was worth it. What a wonderful view! Before us the piny tops of Pressmennan appeared straight from some Alpine postcard. Also before us was the route we should have taken. Instead of turning into Biel Mill at the cottages, simply carry on along the road until one reaches a gap in the estate wall on the left.  This brings you back onto the ‘battlefield’ so to speak.

It was the home straight now, & I swear down this is a perfect pathway for poetic solitude. Turning left at some shooting ladders, the path headed in the direction of the car. After a while a Catrail-esque embankment appeared, in the middle of which some steps lead into an underground chamber with a well, very cool & it took a few seconds for my stone to hit the bottom. 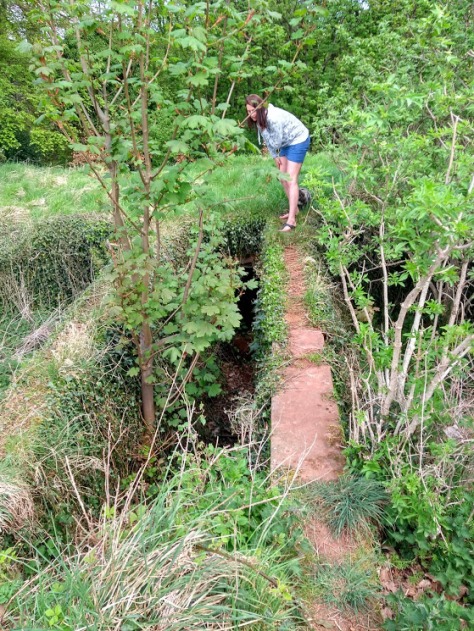 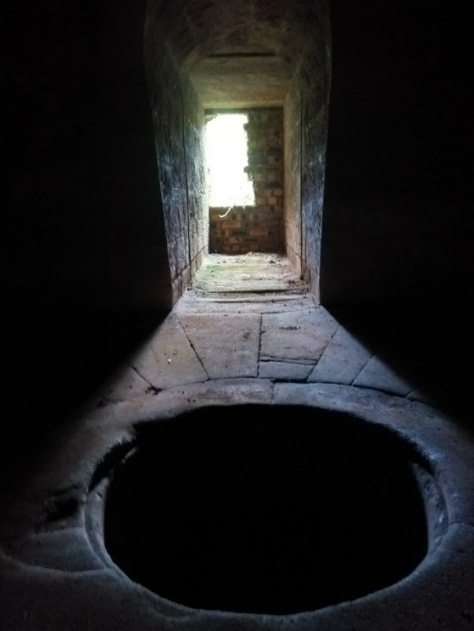 Then it was back to the back-entrance of Biel & our loop was complete. We had been bombarded by beauty, & all that remained was a stroll back up the track & we were away until our next foray into the exploring by foot of Scotland’s inimitable ‘Shire.’ 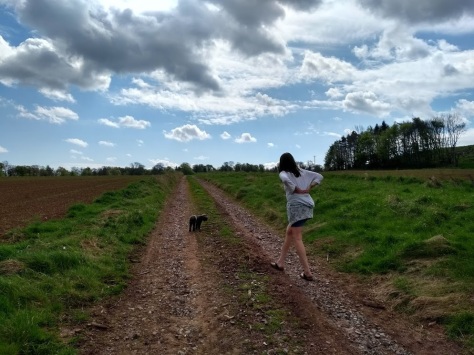 One thought on “Biel”