‘Apres nous, le deluge,’ & this morning the roads of East Lothian are flowing with snowmelt. Last Wednesday, the Zombie Apocalypse flew in from Siberia, & county-wide the streets were full of slowly shuffling pedestrians desperately hunting for bread & milk. A lot of the remoter settlements were cut off completely, out of which situations the spirit of Dunkerque bloom’d & blossom’d in the souls of all. One Garvald resident, Liz Leckie, put up a facebook post reading;

So after 4 days of being unable to leave Garvald, me and Luke just made it out to get supplies. I have to confess I have loved the whole experience. Being stuck at home and realising that outside help wasn’t coming to the village meant everyone had no choice but to rely on each other and the community spirit was something to behold. Stay safe friends and remember if u can’t get milk there’s always coffeemate lol

As for me & Daisy, she really does love the snow, & thoroughly enjoyed testing her burgeoning scent-detectors by digging out balls in the garden. As for a walk, I thought it better to stick to the main arteries, & so settl’d upon an amble beside the Tyne in Haddington I’d scouted out a few weeks earlier. On that occasion I was out composing poetry, which resulted in a facebook post of my own.

So me & Daisy are out wandering Lennoxlove & Coulston while I was writing some poetry. Gets back home, & I’m like, wheres my book. Retracing my steps in a panic just before dusk, mind racing about recomposing the lost stanzas, & 3 miles later the book, my pen & the spare pencil all turn up. Result !!! 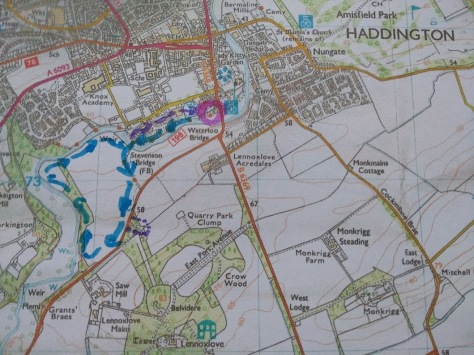 The walk begins by parking at Tyne House in Haddington, next to the historically ornate Poldrate Arts & Crafts Cente in the wonderful Elizabeth Hamilton Buildings. It was nice to be in the county capital. Once the fourth largest town in Scotland, & clearly the most picturesque town centre in the land, Haddington is in the middle of celebrating its 700th birthday as a burgh. The town’s relatively small population of 9000 is just about to get an impressive swelling of numbers from extensive new developments all around the outskirts – perhaps enough new customers to finally convince Sainsburys to build their bloody supermarket! 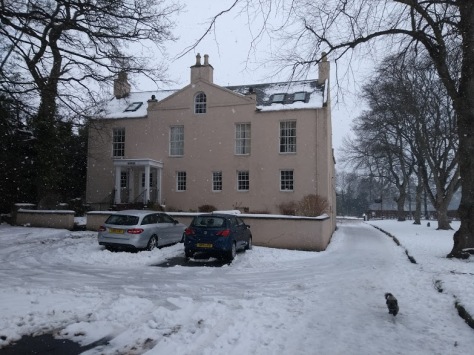 Like many other fine old mansions of yore, Tyne House has been divided up into separate tenements like some Post-Berlin-Wall-Fall communist country. Of its previous owners, Captain William Wilkie  was an interesting fellow. I cannot find a picture of him, but he would have looked something like the fellow in the painting below, which you can actually see in Haddington library at the moment as part of an exhibition by Scottish painter James Howe (1780-1836). 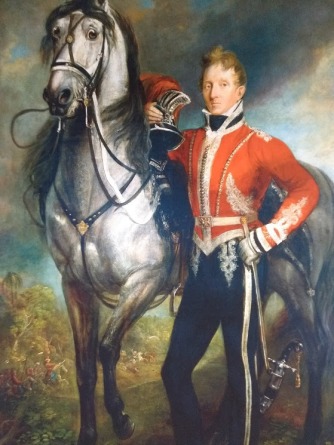 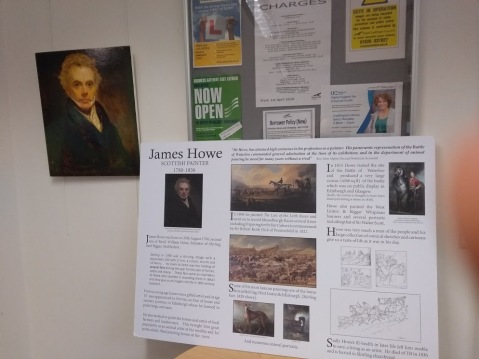 Wilkie was in charge of one of the two companies of Haddington Volunteers, form’d to fend off the invasion of Napoleon after the collapse of the Peace of Amiens in 1803. That Napoleon had his army ready to invade via Bolougne suggest the invasion was probably meant for the South East, but the Spanish Armada did circumnavigate the entire island, so it probably made sense. The Haddington Volunteers trained twice a week & were barracked in timber on a site where the Artillery Park housing was built. The presence of the army did the town the world of good, by the way, with soldier’s pay packets & cultural diversity enriching the inhabitants in a most positive fashion, & probably mixing up the gene-pool along the way.

Starting the walk, while at the house, spend a moment to appreciate the graceful single segmental arch, with dressed-stone arch ring, coursed-rubble spandrels and wing walls of the Waterloo Bridge. Of its history, John Martine in his Reminiscences of the Royal Burgh of Haddington (1883) writes;

There was no stone bridge across the Tyne at this point until 1817, when the Waterloo Bridge was built. There was a ford, and stepping-stones, and a wooden bridge for foot-passengers a little way above it. The mound from which this first foot-bridge started is yet well marked a little below the Sting-dam sluice. The foundation of the Waterloo Bridge was laid with high masonic honours by the Marquis of Tweeddale on the 18th June 1817, being the anniversary of the battle of Waterloo. 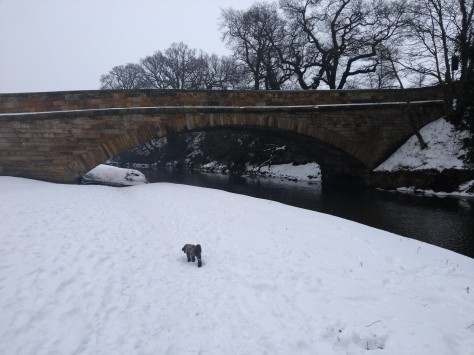 With the river on your left, head along the path & its avenue of trees. There are two interesting plaques celebrating regally inspired plantings; the first for King George V’s coronation in 1910, & the second stretching all the way back to the coronation of Queen Victoria in 1838! 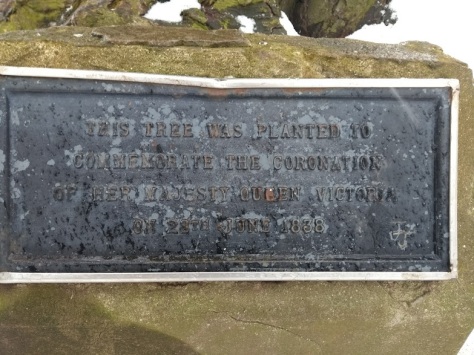 The path continues on, where a steady steam of happy dog-walkers-in-the snow passed me & Daisy. She’s still quiet scared of bigger, older dogs, but she’s getting there. With humans she’s absolutely fine, bordering a tad on the overfriendly, & acts like she’s had a few sweet sherrys at Christmas whenever she meets someone new, often following them off into the distance.

Three years ago, this stretch of the Tyne river walk was fitted with green bars & suggestions on how to use them aerobically. Cara Blair, Community Health and Activity Officer with East Lothian Council, explained how the idea had come about. She said: ‘We’ve been looking at how we can support people who are prone to falls and keep them as active and independent as possible.’ These ‘exercise stations’ are not quite rowing machines, but offer gentle universal routines, including ‘Knee Bends,’ ‘Side Hip Strengthener‘ & ‘Heel Walking.’ 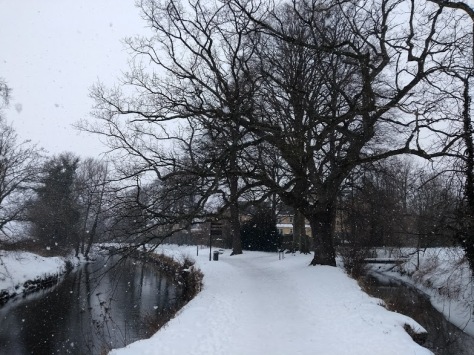 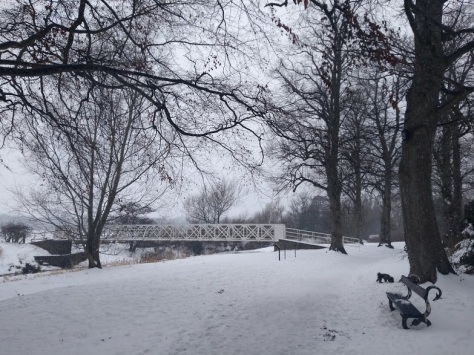 After a wee while one reaches a white box girder footbridge, which should be crossed. We are now on the national cycleway 196, but on the day no cycles could be seen on account of the thigh-deep snow. Keeping a large hedge to its left, the path then thrusts towards the main road where, through a gate & turning right, it forms a parallel pathway to the road,. This part of the cycleway is shielded from the pedestrian (& dog) by another large hedge. 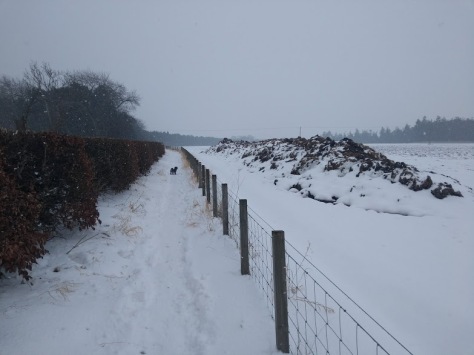 A couple of hundred meters along this path a gap in the hedge-fence is reached, which faces onto the entrance way to the North Port of Lennoxlove Estate. I’m waiting for a little more foliage to congregate before we walk Lennoxlove, but architecturally North Port is always worth a wee diversion. The estate was bought by the Dukes of Hamilton-  the Hereditary Keepers of the Palace of Holyroodhouse – in 1946, & after he inherited the title & lands, the 16th Duke, Alexander, took up residence in the  North Port while the main house was being catered to his tastes. North Port had been built by his grandmother through the classy architect, Philip Vincent Belloc (1927-95), the noted restorer for National Trust.

After our brief excursion across the road, me & Daisy returned to our walk. The path continued to skirt the snowy immensity of a massive field, before disgorging into a wee woodland world. Here the main path continues by the road, but my earlier scouting knew of a feint but very definitive path to the right that would lead me back to the iron bridge over the Tyne. 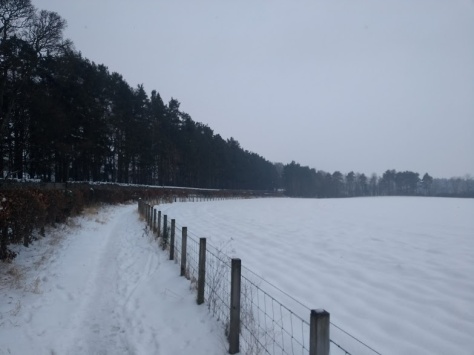 After descending sharply to a stream, followed by a wee ninja leap & of course Daisy’s stout refusal to cross an icy stream once more, & me having to go back & her here & carry her across – I found myself on the aforementioned path. With great joy I realised that the way was marked out by the prints of a family of deer, & duly followed them. To our right a sharp drop leads to the Tyne, but the path more or less sticks to a ridge. 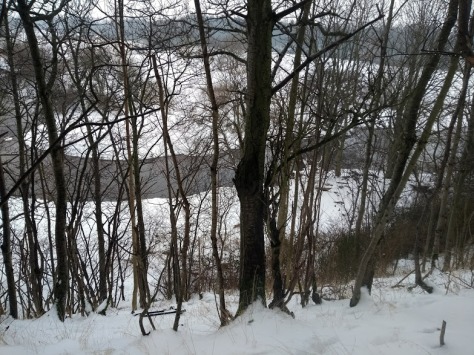 Eventually one comes to a segment of ruined wall, to the right of which there is gap in the fence which needs to be crawled or stooped through I’m afraid, but its well worth the physicality. Once through,  one becomes surrounded by perfect, peaceful forest; although the path must be traversed at something of an angle. 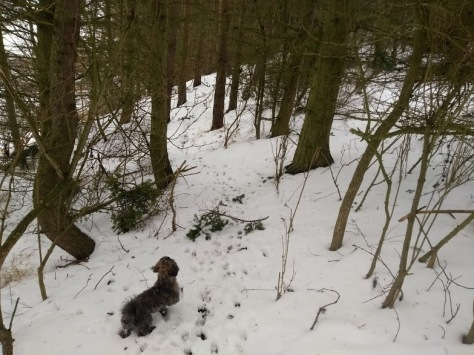 The sloping path eventually straightens out into something neat & tree-lined, which then descends to an impressively large field. To one’s left the rushing Tyne was making the only sounds to be heard, & we found a couple of human print-trails to follow. 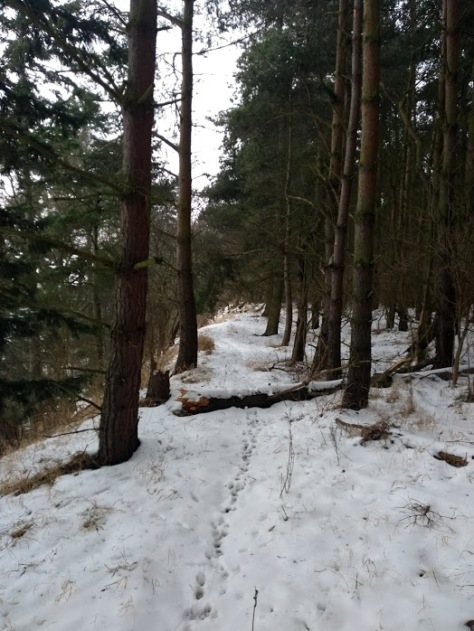 There was one last field to cross before reaching the iron walkway across the Tyne. Keeping the river to the left, we reached a wall, top the left of which was the gap into the field. The last time I was here I kept to the margin, of course, but today I had no need as the snow was both deep & hard-packed & we skimmed the surface in the field like Eskimos on tennis-racket shoes – with the occasional plunge into softer snow being quite fun actually. 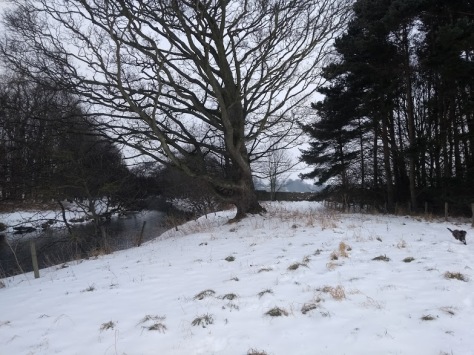 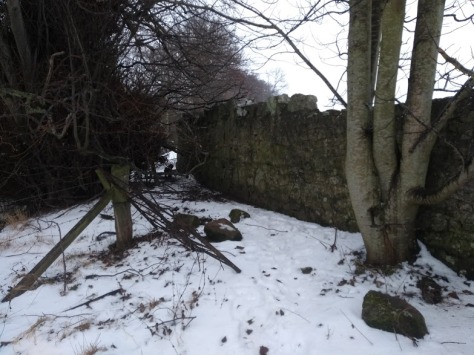 At the end of the field, the Tyne was rushing over a well-crafted weir, & we were soon back on the proper walkway – a bit damp, like, but somewhat spiritually cleansed by our soiree through the snow. 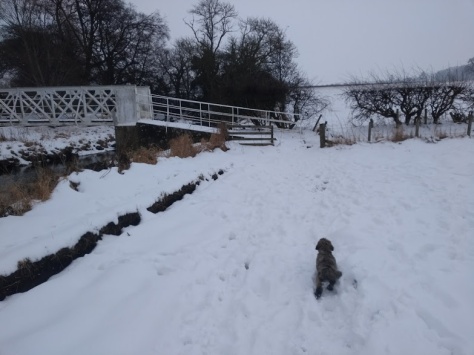 3 thoughts on “Beside the Snowy Tyne”