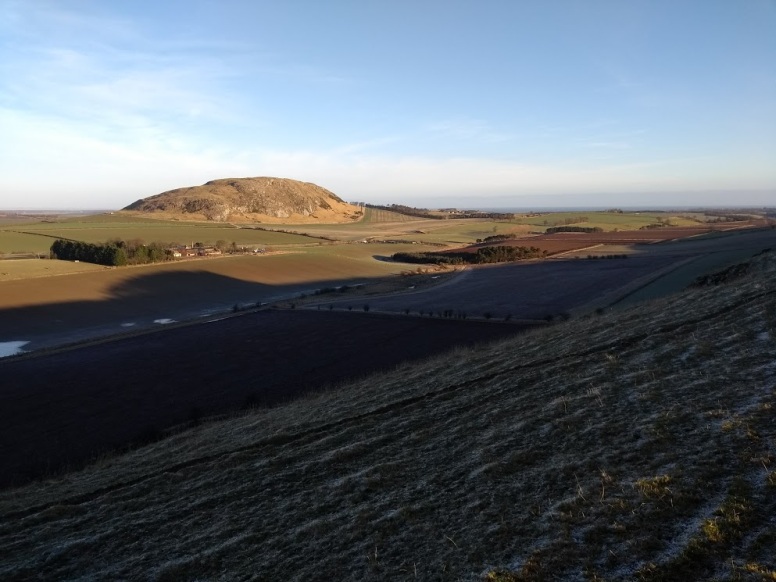 Upon a subzero morning, & when under a blue & brilliant cloudless sky, the county of East Lothian casts an ethereal, ambrosial glow which uplifts the soul & elevates the mind as one drives among the green-white, frosted fields. For this week’s outing, or should I say weekend’s, me & the dog thought we’d drag the rest of the family along. Splashing the car along slightly slushy roads, we soon reached the narrow valley which separates Traprain Law & the ridge upon which sits the impressive Balfour monument.

Parking up by the outhouses of Standingstone Farm, a gently ascending wide track leads up towards Traprain Law, the giant ‘curling rock’ which dominates this part of the county. The slightly frozen soil underfoot was rather springy, & off we all bounded; the girls & their mum were chatting & giggling at Daisy’s magnificent efforts at walking (they hadn’t been out with her yet). It was both cold AND sunny, a pleasant mix that manifested itself best in the frost that still clung to existence in the shadows of the walls. 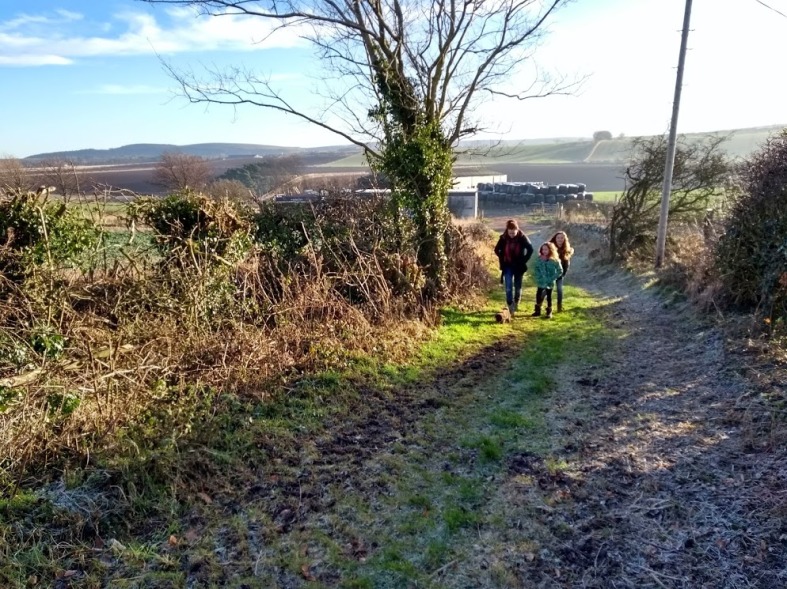 At the top of the slope, where the track aims leftish, we deviated instead along the edge of a field on our right, towards a broken hole in the wall. Scrambling over fallen stones & hopping over the fence, we began a steep climb to the first mini-summit, with the gravity-defying Daisy bouncing upwards beside us. 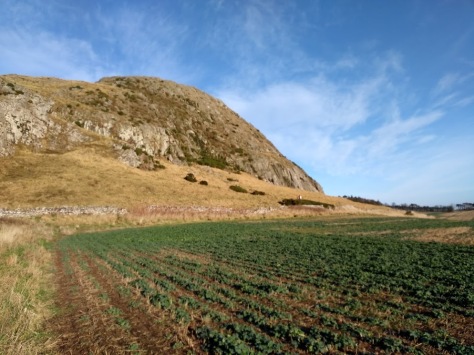 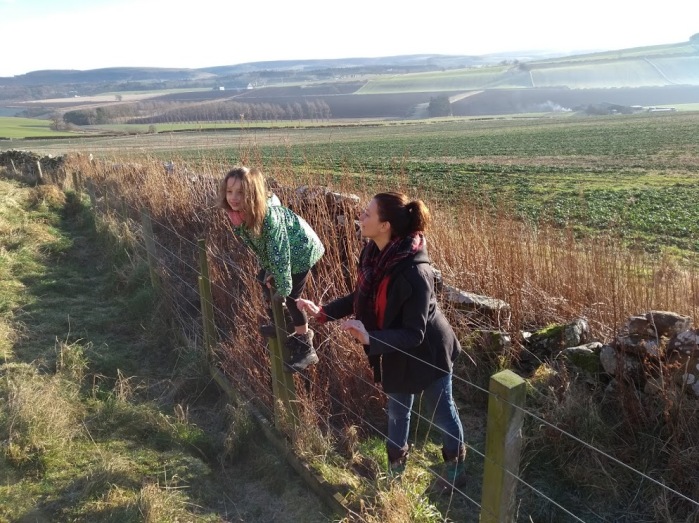 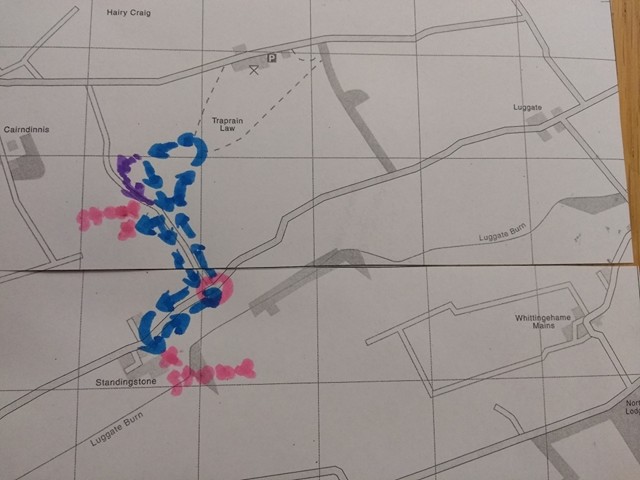 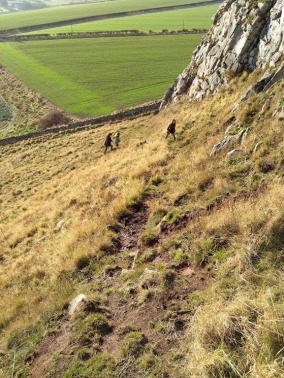 On reaching a level, grassy area – we would not be going any higher today – Roxy & I read through the early 12th century ‘Fragmentary Life of Saint Kentigern,’ which tells the story of how Princess Thaney was flung from those very tall, very jaggy cliffs above us 1500 years ago.

So a certain King Leudonus, a man half Pagan, from whom the province over which he ruled obtained the name of Leudonia in Northern Britannia, had a daughter under a stepmother, and the daughter’s name was Thaney.

Thaney’s dad was King Leudonus, or Loth – whose name inspired Lothian itself – & he was rather upset at her unofficial pregnancy. Cue ancient customs, Thaney’s tossing off the clifftop & a holy miracle saving her. Not knowing what to do with Thaney – double jeopardy & all that – she was eventually set floating in a boat at Aberlady, from where she landed safely in Fife & gave birth to Saint Kentigern. 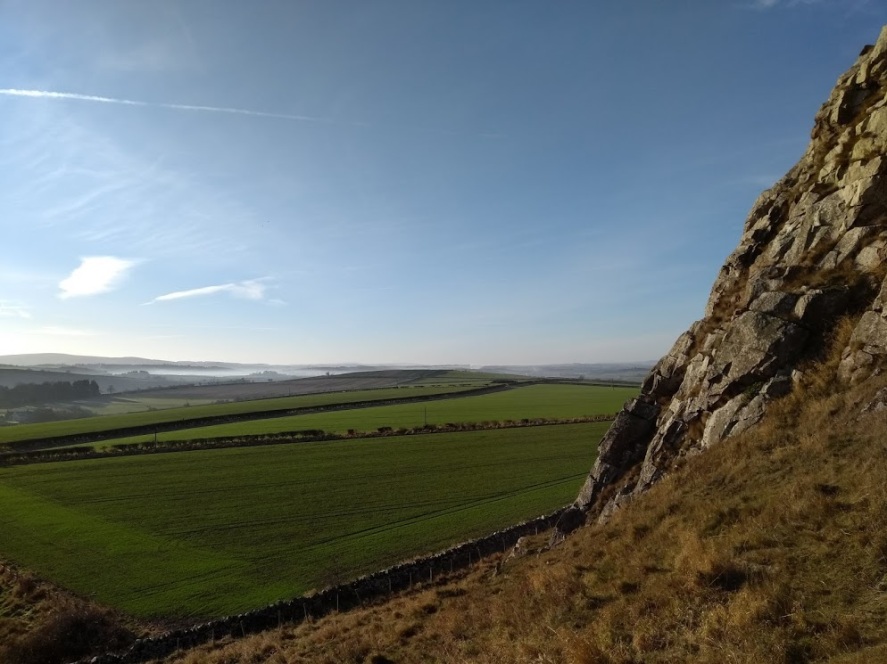 For mystery buffs, there is a highly interesting passage contained in the Fragmentary Life. We pick it up with King Loth on the warpath against a local swineherd who helped his daughter on the path to her ‘unofficial’ pregnancy.

He therefore pursued him, who fled with hasty steps. When he saw he could in no wise escape the king, he turned aside a little out of the way into a marshy place in hopes of saving his life. And when even there he found he could get no safe retreat, snatching up a javelin he transfixed the king, throwing it upon him from behind by means of a thong. But the friends of the king, in the place where he fell, erected in his memory a great royal stone, placing on the top of it a smaller one carved, which remaineth to this day at a distance of about a mile to the south of Mount Dumpelder.

Dumpelder was the original name for Traprain Law. According to WJ Watson in his Celtic Placenames of Scotland (1933) it could have derived from the Brythonic Dunpaladyr, or ‘Fortress of Spearshafts.‘ Looking at the evidence given, I told the girls that we were now going to try & find the Loth Stone, & that what is said to be the Loth Stone today might not be the Loth Stone described in the vita of Saint Kentigern. 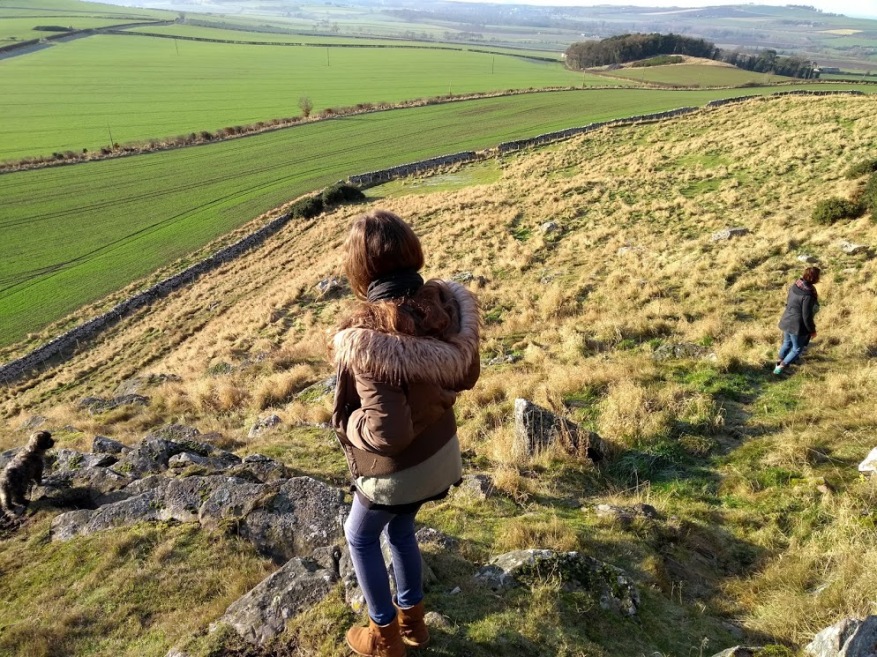 Beginning our descent, we soon pass’d a couple of better-kitted-out walkers (still haven’t bought my new shoes), among a scattering of folk we saw in the hour we were there. The Traprain experience is varied & attractive, whose gentle business is not at all abrasive if you desire peace & quiet.

Our journey back was a little off piste, & a bit boggy; as we headed north to a ruined cottage, scampered through a hole in the fieldwall & crossed a muddy field (the purple route on the map) to the track. One expects simply returning more or less by the route we came would have been more salubrious. Still, it was fun, & the girls seemed to enjoy having mud-heavy boots, but not so much the barbed wire – until I covered it with my heavy coat like an Elizabethan gallante.

Following the track south, we soon reached the point of original divergence, at which place, if one turns right & walks for about 80 meters along the field-hedge, the LOTH STONE can be admired. Moved from its original position in the middle of the field, even so, its still only about a third of a mile from Traprain Law, & not the ‘mile to the south of Mount Dumpelder’ as given in the vita.

Walking back to the car, the girls whipped their soggy boots off in a flash, so we were forced to drive the small stretch of road up to Standingstone Farm. Named after a highly similar monolith to the Loth Stone, it can still be found upright in an orchard on the farm. Further from Traprain, & just above the marshy Luggate Burn, this stone is a better candidate for King Loth’s memorial, but there is one thing missing , the Vita’s ‘smaller one carved,’ which was placed upon it. 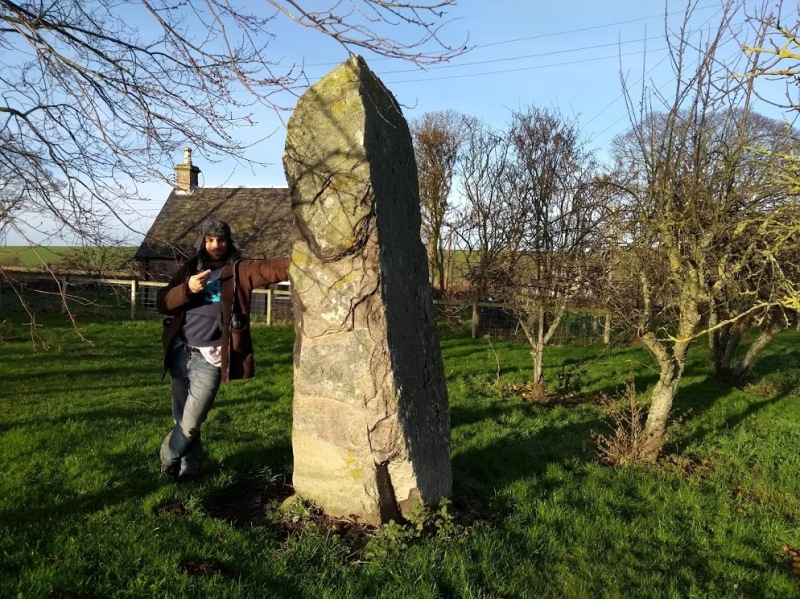 It was time for a reward-burger for dragging the girls out of their cozy Sunday morning, so we drove to the Open Arms hotel in Dirleton. Alas, on reaching the place we discovered it was closed for its annual 2 week clean – typical – so instead we went to the dog-friendly Tyneside in Haddington for a tasty meal & the West Ham-Shrewsbury FA Cup tie. A fine way to finish our walk, & the whole pub was going completely mental for Daisy’s cuteness.

Last night I began thinking about the Loth Stone problem, & after a bit of googling I think I’ve got the solution. Near the two stones is the parish church of Morham, where what is thought to be an Anglo-Saxon cross shaft was found re-used in the south wall of the church, which is kept today in the National Museum of Scotland. The Canmore description of the stone reads;

This is a central portion of a very fine Anglo-Saxon cross-shaft, broken top and bottom. All four faces are carved in relief, with a cable moulding at the edges and the ornament contained within a plain roll moulding. The cable has a median line. Face A bears a vine scroll with ridged nodes, trilobed berry bunches and leaves with scooped centres, and the four surviving scrolls are inhabited by birds and animals whose heads and limbs extend beyond the confines of the scrolls. Unusually, the creatures are composed as if they were designed to be seen in a horizontal strip, like a frieze, rather than rising vertically. The lowest surviving quadruped is upright and has one hind leg braced against the volute and its head and other three legs extending well beyond. The body of the next quadruped faces the animal below, but its head is twisted back to bite the volute in which it stands. Its front legs are braced against the vine and its hind legs trail over the vine. The next two creatures also face downwards. The third is a bird biting a berry bunch, with one leg braced against the volute and the other stretched behind and outside the volute. Its wing extends over the volute and its tail feathers extend below. The fourth is a grotesque creature whose elongated neck is intertwined with the volute and whose head has the protuberant eyes of a Pictish goggle-eyed beast. Alternatively the head may be on the tail of a beast standing upright, of which the upper part of the body missing. Its front legs are braced against the main stem of the vine, but its hind-quarters are missing and outside the volute.

There are two key pieces of information here. Firstly, where we read, ‘unusually, the creatures are composed as if they were designed to be seen in a horizontal strip, like a frieze, rather than rising vertically,’ we may imagine the stone being placed horizontally & supported by BOTH the Loth Stone & the one at Standingstone Farm. Each monolith has a splice-edge top, into which the Morham Stone could be rested, especially when Canmore tells us the stone is ‘broken top and bottom.’ I rang up the RCHAS in Edinburgh yesterday looking for a photo of the Morham Stone to verify my theory,  & this is what they sent me… from the angle of the break it certainly seems that at least one side would have fit perfectly into one of the monoliths. The next time I’m in Edinburgh, I might have to take a trip to the NMS & see whats going on with the other end of the stone. In the photo above, the bottom appears too straight for it to ‘broken’ as Canmore says, & is perhaps set in some kind of base… 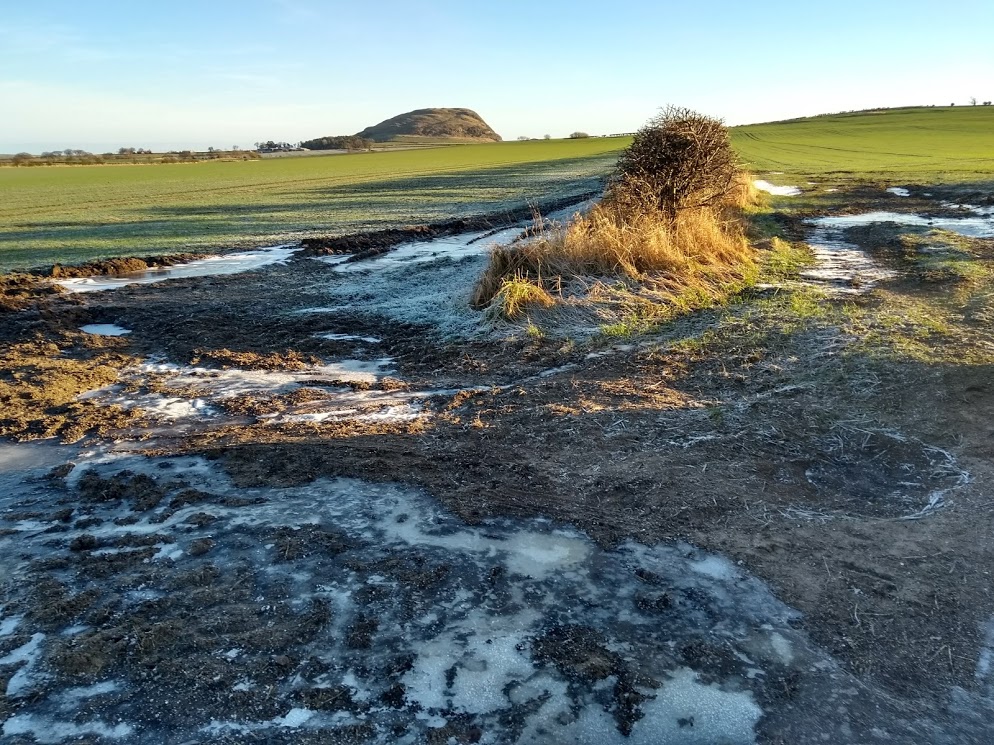 2 thoughts on “The Loth Stone”