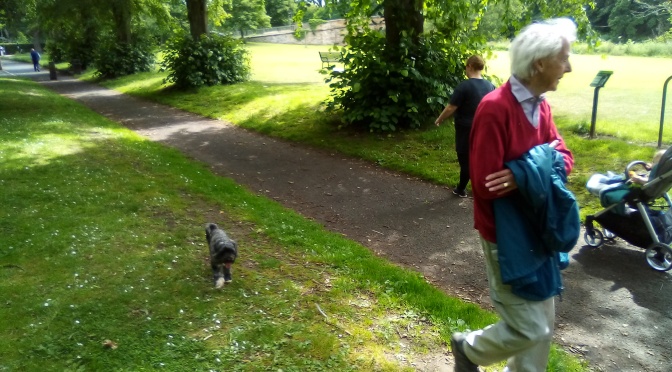 At the start of the Walking East Lothian saga, I took a walk by the River Tyne in Haddington in the most splendidly wintry of conditions. The post was called Beside the Snowy Tyne, & this next walk is something of a sister, entitled Beside the Sunny Tyne. My companion is somebody else from those early walks – Mr John Wood, who accompanied us around Humbie Church Wood. I can’t help myself, I always have to prefix his name with a Mr – down quite simply to the immense respect I have for the man.

Mr John Wood loves Daisy, saying she is the best behaved & friendliest dog he has ever encountered, which always wins points with me! Seeing as he is an octogenarian, he must have seen a lot of dogs! He is also a native Haddingtonian/Haddingtonite (I don’t actually know the correct term), & with the local history library being closed, I thought I would pick at the pages of human memory embedded in my friend’s ever ebbulient mind.

So to the walk, on a rare summer’s sunny day. It begins at the main crossroads of Haddington, just before Victoria Bridge. There’s loads of places to park in the town & you get 90 minutes free.

At the pedestrian crossing there is a terrace-house lined close – Gowl Close – which leads to the river. Take this. 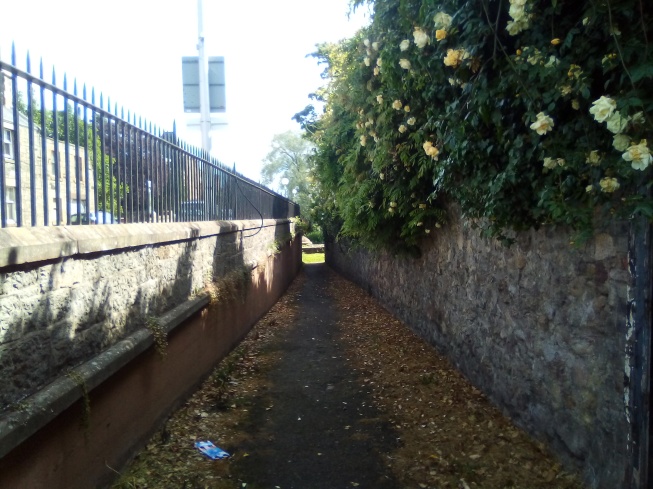 At the end of the tunnel-like close, turn right & you’ll now find yourself  by the Tyne itself. Continue forward along the twisting turning path until it breaks out into a tad more spacious greenerie. 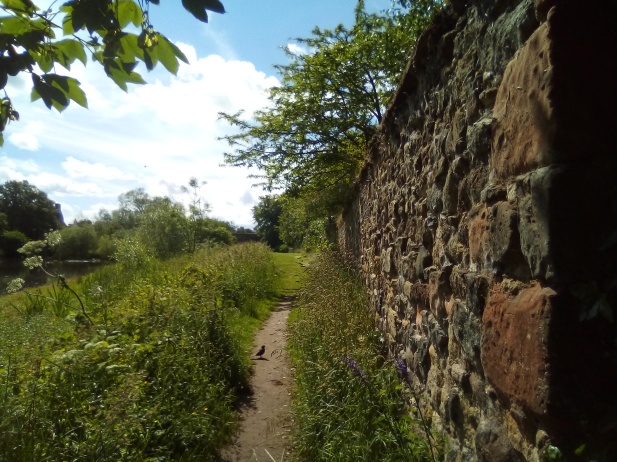 You will soon come across a building on the right. This is the old fire station with its hose drying house, now a cool arts & craft store. 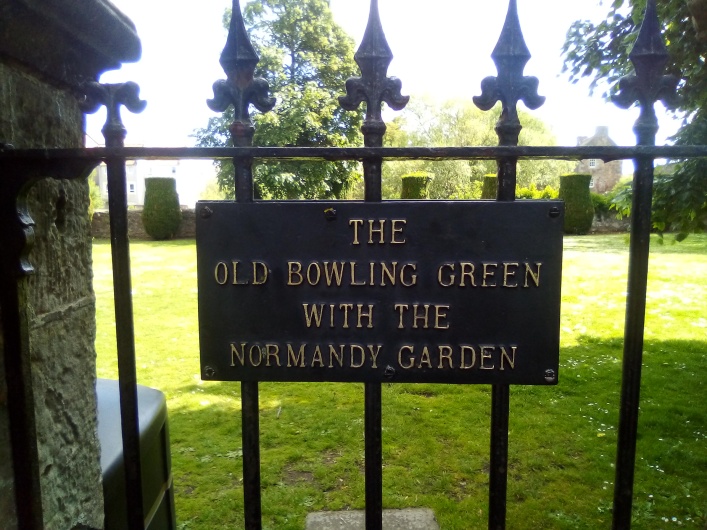 Just beyond this is the old bowling green, with access from the road. Its a great meet & greet place for dogs & also Mr John Wood, who joined me & Daisy here. He was happy to, because this was the favorite walk of his sadly-missed wife, Sheena.

Back to the riverside we ambl’d gently, passing the old packhorse bridge &  admiring the Waterside Bistro across the waters, & the swans who come back every year to further their signet dynasties. Lots of waterfowl make the scene a doolittle’s worth of admiration.

That side of the river, Mr John Wood told me, was the Nungate, which is a seperate barony with its own gala. This is the special tartan made for the gala last year.

In 2018 a call was made for Nungate residents to come up with their own design for a Nungate Tartan. More than a dozen entries were submitted, with the design of local resident Kate Cowan coming out on top. The concept was then registered and produced by Strathmore Weavers. “The Nungate has a long history and has always had a strong identity of its own,” said Liz McDougall, chairwoman of the Nungate Gala Committee.

Back on this side of the river we pass the wonderfully titled ‘The Collegiate Church of St Mary the Virgin.’ It is a great architectural gem, the  which began life in 1380 & contributed to the status of Haddington asd one of Scotland’s most important burhs. Indeed, it is Caledonia’s longest church at 206 feet (62.8 metres) from east to west.

Official Christianity in Haddington goes back even further, for there is record of the church in Haddington in a charter of David I of Scotland dated 1139, giving the monks of St Andrews Cathedral Priory the benefits of its revenues. The king granted unam mansuram in Haddington, as well as to the monks of Haddington a full toft “in burgo meo de Hadintun, free of all custom and service”.

The church is also home to some of the crown jewels in the Lammermuir Festival, a couple of which I’ve reviewed in recent years. Here’s  one in full, from 2017. 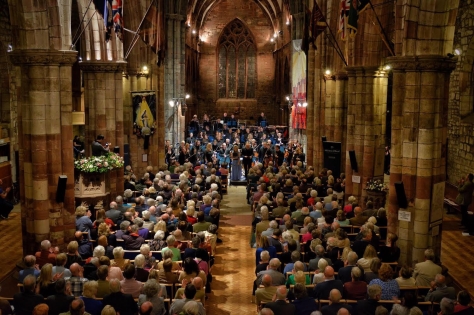 The Lammermuir Festival, under the patronage of Steven Osborne, is East Lothian’s answer to a night of high culture on the town, but scattered amongst the splendidly carved architectural delights of Scotland’s greenest county jewel. Over the weekend, I managed to catch a couple of this year’s outings; the opening concert by the BBC Scottish Symphony Orchestra in the antique, cavernous & elegant parish church of St Mary’s in Haddington; & the much smaller, but equally as pretty-a-place-to-be church that is Dirleton Kirk. Both events were packed out & both selections of music were outstanding, as walls & rooves made to reflect choirs & ministerial preachings were all set to amplify & imbue with beauty the dancings of the reeds & strings.

At St Mary’s on the Friday, I was furnish’d with a fine three-course feast all cooked up for our delectation by conducting master-chef, Martyn Brabbins. For starters we had two slices of Wagner; The Prelude & Liebestod from Tristan und Isolde, both of which leapt upon the delicious acoustics of the kirk like young & playful embattling stags. As soon as the Prelude began we were all rooted to the spot, the music wafting over us as if fanning our cheeks on a warm summer’s eve. This opener – to both opera & festival – then grows in intensity until the cosmic, oversensual climax, & we were off, the Lammermuir Festival of 2017 was under way.

The next course consisted of three arias by Mozart, exceptionally sung by the young & meteorically rising talent that is soprano, Rowan Pierce. A Samling artist, she had won the first Schubert Society Singer prize at the London Song Festival in 2014, & one soon understood why as the ghosts of choirboys past lifted her angelically jasmine voice to the rafters & beyond. After an interval of exquisite honeycomb ice-cream & polite chitter-chatter, the third course was served, Mahler’s sleigh-bell jangling, soul-pounding four-part Symphony Number 4. Each of the four movements were played with both neat precision & piece-specific bombast, & the hour simply flew by upon electric wings.

The next night I drove for the first time to Dirleton, a wondrous little place, rather like a Mendips village, quite untouched by modernity, in whose kirk I would be nestling for a while. The reason was to be the Hebrides Ensemble, eight extremely talented musicians who would make Schubert’s Octet in F Major their own. Prior to this was a wee waltz though the short Rhapsodic Quintet of enigmatic 20th century composer, Herbert Howells. One can really feel the burgeoning century’s love-affair with new music in his notes, all of which are most serendipitous to hear. To listen to this particular piece is to enter a dream-bending drama, a darkly dancing-carousel & an exceptional exposition of the full range & capabilities of the Quintet.

To the main action, then, & the Octet – a brazen attempt to out-Beethoven Beethoven – offers the hearer a growing & continuous delight. The opening note drills a hole into the psyche, through which pours wave after wave of Schubert’s melodic genius. Sometimes eyes were closed, sometimes they were gazing at the buttermilk walls, sometimes they were watching Enno Senft wield his double-bass like a medieval potter’s wheel. I felt my imagination hurrying through time to the dances of Regency England, & recreating the dance moves of gallant lords & passionate ladies in my mind. From the Allegro Vivace onwards, this Octet is near perfect, almost otherworldly in its brilliance, full of fluttering phrases & feet-thumping rhythms. Combine all this musical manna with the location & an ephemeral 80 minutes, then a simply wonderful time is had by all.

This was my first taste of the Lammermuir Festival, & I recommend it most heartily. East Lothian is a fascinating & quite frankly gorgeous corner of God’s green earth, & an excuse to wander its contours is to be well-received. Mix into this several heady portions of classical music excellently chosen, excellently played & most warmly appreciated, then one cannot fail in feeling rather exultant about life. Indeed, one could fall in love on evenings like these.

Back on the walk with Mr John Wood, as the path snakes beyond the church it opens out into a large green area which plays host to public events such as last year’s fun Roman encampment.

It also has a few steps leading down to a sub-rivulet of the Tyne where in aulden days, according to Mr John Wood & even before his time, the womenfolk of Haddington would gather to do their washing, rather like the modern Indians do in their rural villages.

Afterwards, our East Lothian ladies would have dried their clothes on many washing lines strung about the green, two of which still remain on the other side of the Waterloo bridge.

Passing under that graceful single segmental arch, with dressed-stone arch ring and coursed-rubble spandrels and wing walls is the best way to continue the walk. 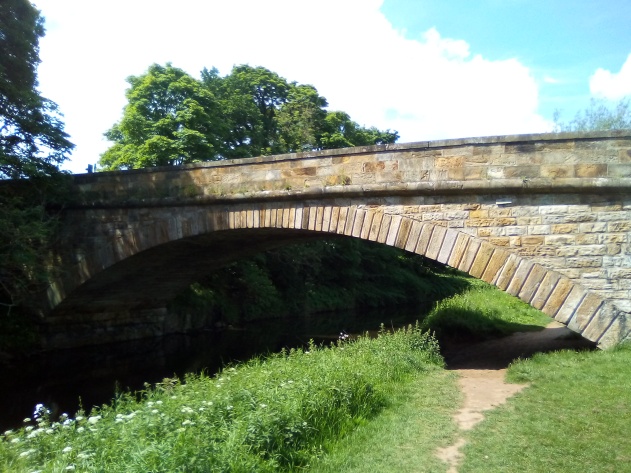 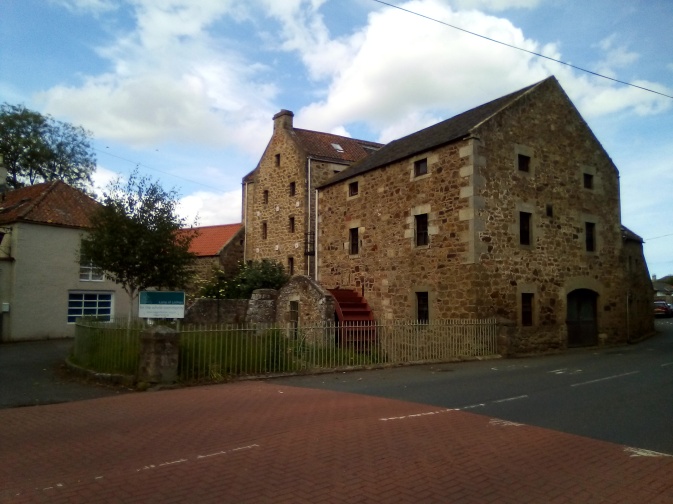 Although its possible to cross the road at the Poldrates Mill area. This is a cool spot, by the way, with the old waterwheel still visible. Closed in the 1960s (Mr John Wood’s old neighbour’s father was a miller), Poldrates Mill is now at bastion of the arts, while the old Tyneside Hotel is divided into two – a residential half & a restauranty half, which has had several owners over the years. Personally I think it would be best used as a small theatre but that’s just my arty bent!

We continue now past the row of trees all planted to mark certain parts of Queen Victoria’s reign – the original iron lady & empress of all she surveyed on her ornate maps. Then she sometimes went hunting on the Balmoral estate & spent a lot of the public money on booze.

At this point Mr John Wood & I began chatting, as we do, & I quizzed him about the growth of Haddington as a town. He’s all for it, he says, & witness’d first hand the 1960s overspill from Glasgow & its 250 families, from which came a swelling of membership in all the local societies, such as the dramatic & the oepra groups.  He also commented on the introduction of bus shelters to keep the swelling populace dry, & the lowering of the pavements for the disabled – I just love that stuff! 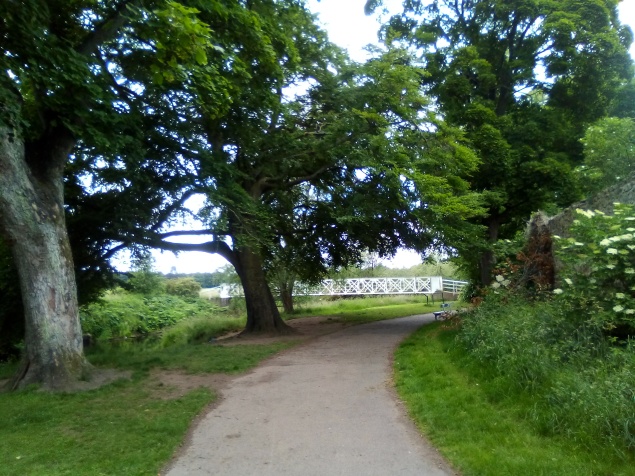 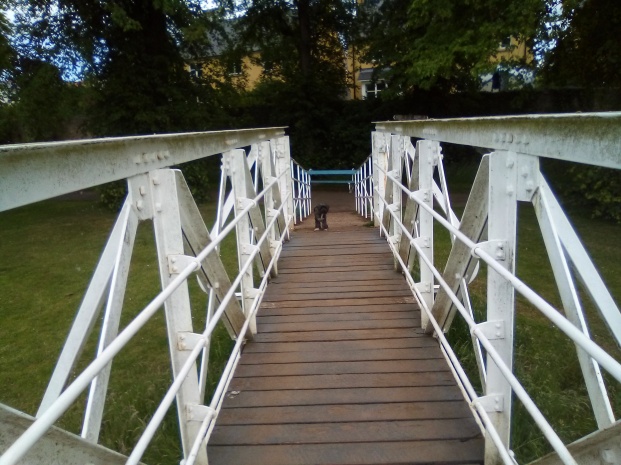 The path eventually comes to the bridge which leads south to Lennoxlove & the Gododdin Heritage Trail. Here Mr John Wood showed me the foundations of the old bridge, sleeping under the river surface like  crocodiles. It had been swept away by the floods of 1948 –  more devastating even  than that of 1775.

Back on the Tyne riverpath we soon come to a junction of sorts, on the rigth of which stands a more urbanised area. Entering this world of brick & mortar, Mr John Wood began to regale me more on the great Haddington floods, & showed me the marker on the building where waters reached in 1948.

This building is the 19th century Simpson’s  Maltings – a former great employer of the townsfolk which cut & dried the barley used to make whiskey.

It was now time for the loop back to the river walkway & the way we came. To do this you must find a slightly hidden pathway between the swimming pool road & the modern houses.

Yet there was time for one last beautiful moment with my guide. He showed me a wall with bricked-in windows, remnants of a string of small cottages in which baby John Wood spent the first fews years of his life while his mother was a wever at the nearby West Mill. Discovering that little nugget of Haddington’s history was the reason I invited him along!