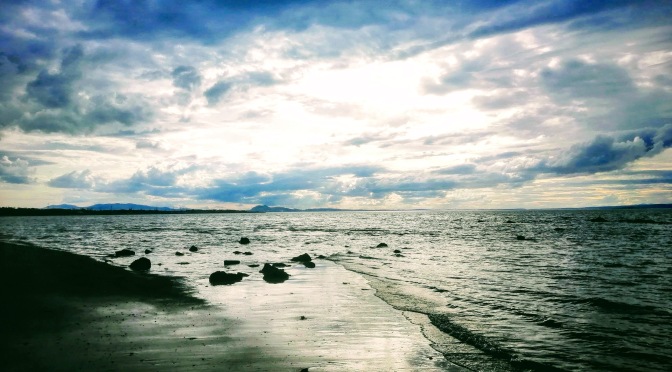 This next walk’s a good un, a really nice blend of woodland, open spaces & the sublime shoreline of Longniddry Bents. It starts at a parking spot at the south end of Dean Road in Longniddry, just near the junction with the A198.

You can also get there from the B1348 Links Road, & there is indeed a carpark at the junction – but you might as well park up the road for free. 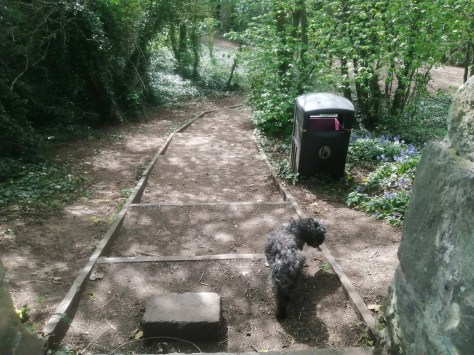 The car should be next to a wall opening which leads into Canty Wood, or Longniddry Dean as its also called. Turn left here & follow the woodland path for about 100 meters.

You will come to a spot where there is a primitive ford across the burn to one’s right – take this & emerge in an open field. 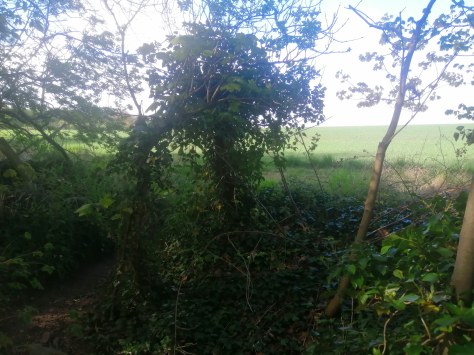 At this point turn right & skirt the woods as they lead bend north towards the sea. 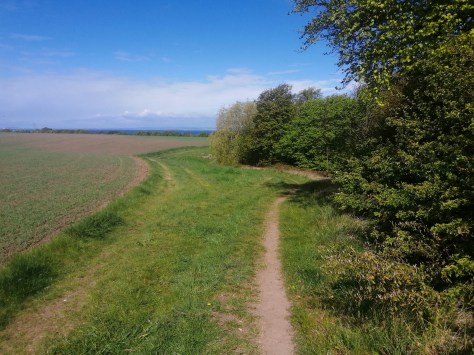 Mary Queen of Scots was known to be playing golf in the area of Longniddry in 1567 – ‘over the fields of Seton’ – shortly after the murder of Darnley and was admonished accordingly! It was another two hundred years, however, before the 7th Earl of Wemyss & March bought land at Gosford ‘to be nearer the golf’ and a further one hundred and fifty years before the 11th Earl of Wemyss invited Harry S. Colt to design and build 18 holes. 150 acres were made available and thousands of trees were cleared to create a course measuring some 6,369 yards. Some of the felling occurred in (what was) the Boglehill Wood, thought to be a site of worship for local witches and warlocks and now the site of the 6th and 10th greens. 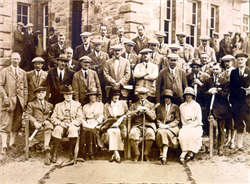 The photograph above commemorates the inaugural match shortly after the course opened in 1921 when James Braid & Ted Ray took on JH Taylor & Abe Mitchell in a 36 hole fourball match. 4000 spectators were estimated to have watched the match between these four famous professionals, including two of the Great Triumvirate, the third being Harry Vardon. Braid & Ray shot 70 & 67 against the 71 & 73 of Taylor & Mitchell to win the match. According to Braid’s ledger, he received £10 in either appearance or prize money. The four professionals are in the second row of the photo, with George Taylor Longniddry’s first professional, second from the left. In the middle, wearing a bow-tie is Stuart Forsyth, proprietor of retailers RW Forsyth which had prestigious stores in Edinburgh & Glasgow. Stuart Forsyth was elected in 1935 as the first Captain of Longniddry Golf Club. The 11th Earl & Countess of Wemyss are in the front row.

As I traversed this stretch with my ever faithful dog, I ask’d a local if the path had a name – apparently it doesn’t, & I thought it a splendid idea to call this bit of Walking East Lothian – The Daisy Way. I’ll pay for a Greyfriar’s Bobby Style Statue along it somewhere if the council let me. 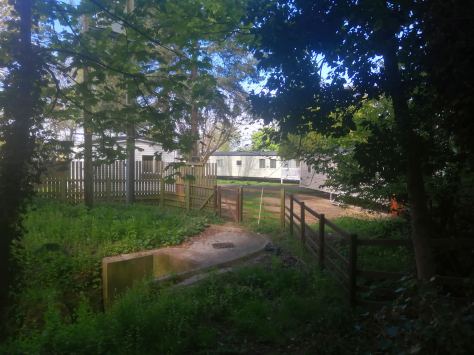 At the end of Daisy Way, cross over the road & enter Longniddry Bents – a wonderful world of dunes, sand & sea. The basic idea is to head east, & you can either go along the beach, or path through the dunes or the woods – three ways, a veritable trident of possibilities.

Longniddry Bents is known best for its plant life. The base-rich soils have allowed a number of plants to flourish here that are only seen occasionally elsewhere in the county. In May, yellow cowslips are abundant, their nodding heads enabling you to tell them apart from their close relative, the primrose. Cowslips are quickly replaced by bloody cranesbill, bright pink-purple flowers that occur in clumps. Alongside the flowers, this section of coast attracts a number of sea duck and wading bird, together with sandwich terns during summer. 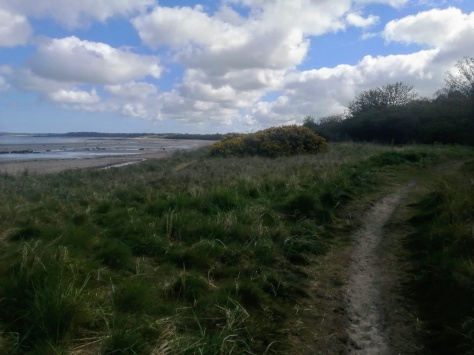 The area is popular, mostly in the summer months, with local families, holidaymakers, picnickers, horseriders, ramblers, metal detectors, dogwalkers and the occasional kite buggy. The shallow bay is a popular watersports location for windsurfers, kitesurfers and sea kayaks. Many sea and wading birds frequent the area making it a regular haven for bird-watchers. A small community of rare water voles are known to reside around the several burns running out of the bents. Grey seals are often spotted to the west of the bay.

If the tide is out you get to see cool relics of maritime past, while at the land-edge or concrete blocks designed to keep out Nazi tanks. 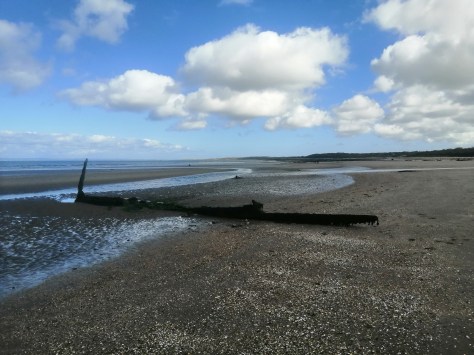 Eventually there appears a gap in the dunes along which a path snakes to the Links Road, passing the aforementioned paying car park.

Before we leave Longniddry Bents, lets just fly quickly yo Canada & the desrted hamlet of Bents, Saskatchewan, named after Longniddry’s bents, but in the middle of a vast continent & not by the sea.

Bents was officially established in 1930 along a CPR rail line that ran between Perdue and Rosetown. At one point Bents boasted several residential homes, a small train station, two grain elevators, a dance hall, a general store (Longworth’s General Store) and post office – all along a single street. By the 1960s the town began an irreversible decline when the southern section of the rail line was abandoned.

Today, little remains. Only one of the two elevators, the Saskatchewan Wheat Pool elevator, still stands. There are two houses left. One, belonged to a huge family and the other belonged to an auctioneer. 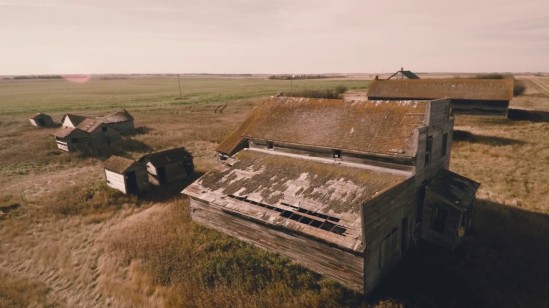 The general store/post-office is still there but in badly deteriorated condition. There are random outbuildings and old farm machinery dotting the former town site. There is also a metal swing-set, missing the swings, sitting alone in the grass beside the general store. 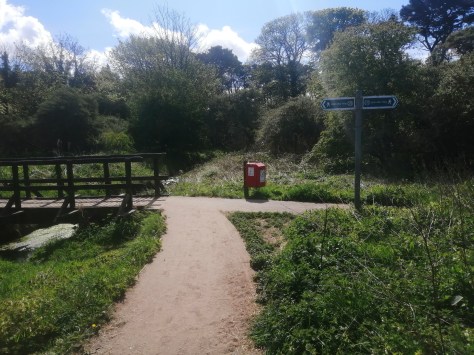 Crossing the road here gives you access once more to Canty Wood, a delightful carouse of which will bring you steadily uphill to the car! 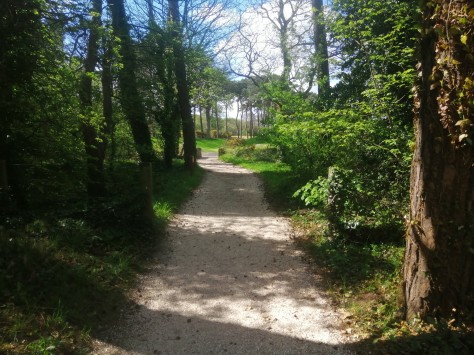 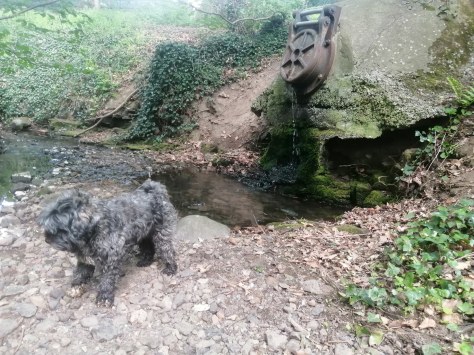