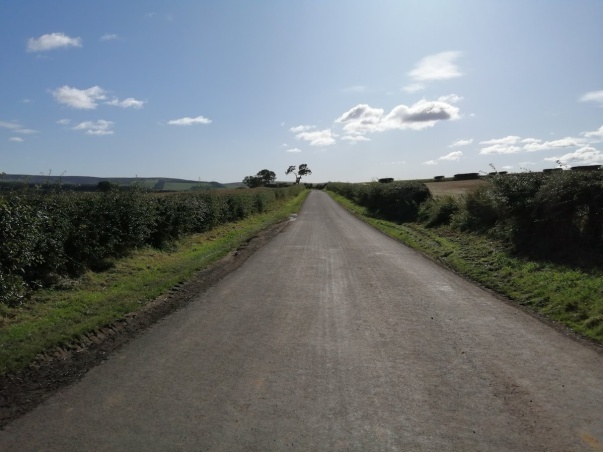 We last left the Gododdin HeritageTrail on a quiet road junction just to the south of Papple. Heading north along the tarmac, or the wide green verges, you soon come to a hillcrest, beyond which unfolds a splendid view of Arcady.  The Lammermuirs  crown the distance, while in the bottom foreground of this perfect scene stands Papple House & its gorgeous Steading, the latter of which is currently in a state of renovation.

George Mackintosh is already a legend in these parts. He had grown up on a farm near Inverness, which had a steading. Unfortunately, that particular steading is now a carpark, but when the Papple property came up for sale he determined on some sort of personal paean to his childhood & bought it in order to create a not-for-profit heritage centre dedicated to the history of agriculture .

Papple Steading was acquired for the purpose of saving and preserving a farm steading. Our agricultural built heritage is fast disappearing and there are no significant complete farm buildings of this grade in Scotland which are open to the public. Furthermore the stories of Scotland’s agricultural revolution and the “Improvement Movement” are not told with authority in any single place.
George Mackintosh

That by next year there will be accommodation & a cafe at the Steading, & that the Gododdin Heritage Trail goes directly by it, is surely no coincidence! My walkers are gonna need such establishments of succor, & it all seems meant to be! On hitting Papple, then, the will also discover nuggets of wisdom (kindly provided by Mr Mackintosh) such as;

Papple just oozes history. The antique records show how the Cistercian nuns of Haddington once owned lands in ‘Popil,’ while in the 19th century, self-made Madras-money-man James Balfour of Whittinghame Estate set in motion the building of the steading, completed on the watch of future prime minister, Arthur Balfour. 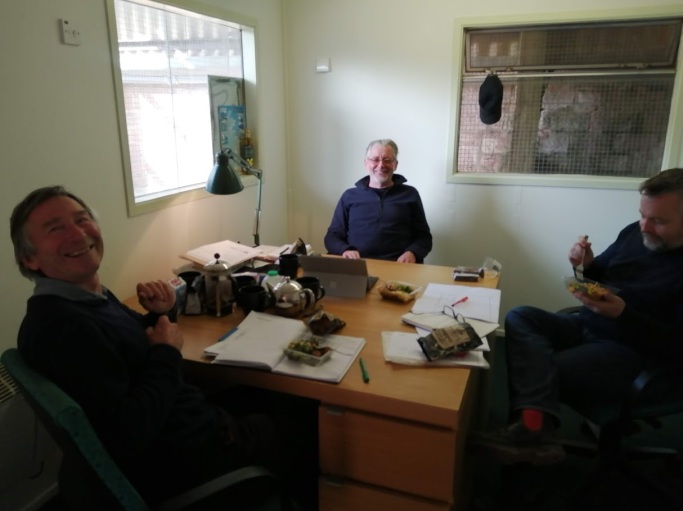 After a pleasant wee chat with George & his architects – they were all having lunch together when I popped mi ‘ead in – I left Papple in the direction of Garvald. Passing by the farmhouse you come to the road, where you must turn left. In October 2019 the walls to Papple/Whittinghame are being restored by a lovely local lad called Giles, who expects his work to be finished by next March. 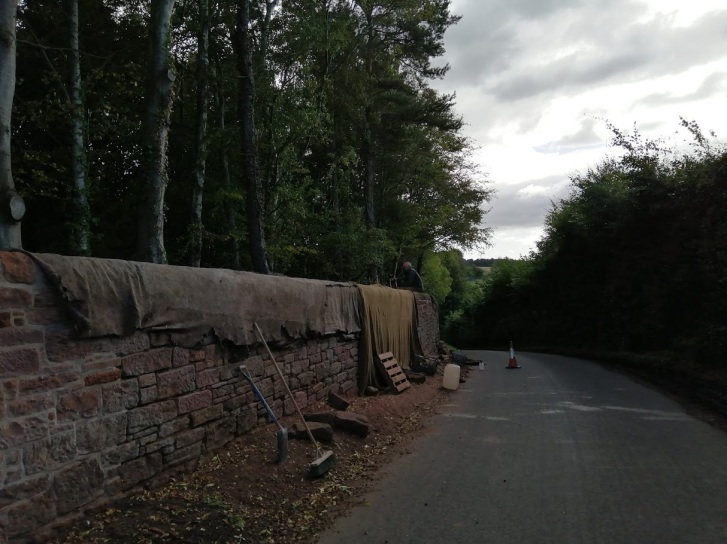 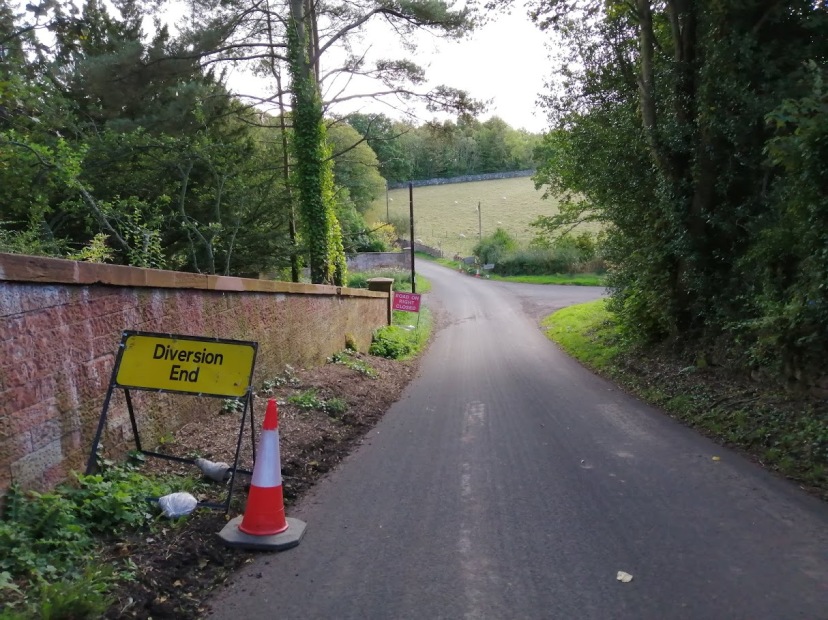 Following the road down the hill leads you to a junction – the North Lodge of Whittinghame is on the left & the road to Haddington on the right. Ahead is the uphill road route we took today – turning right at the junction in the direction of Gifford first photo below).  It is also possible to enter the field across from North Lodge, head along the valley bottom to the gate, then take a sharp left up the hill.

Both routes bring you to a gate, across the road from which is the entrance to some big fields. At this point commences a public pathway marked on all the maps, altho’ difficult to access in the summer – its been left to seed I think. 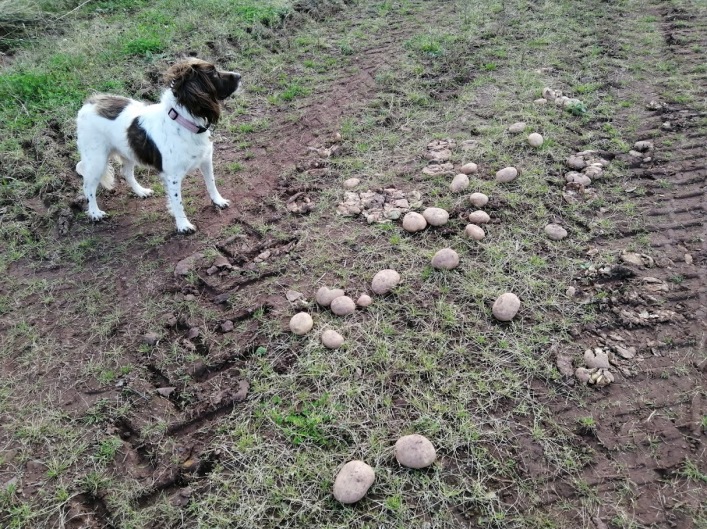 Heading south, the path brings you round the back of Garvald Grange & into a field where sheep are often found. At this point its a good idea to introduce a wee code of conduct for the rural portions of the Trail.

1: Close all gates behind you

3: Dogs on leads around livestock & game-birds 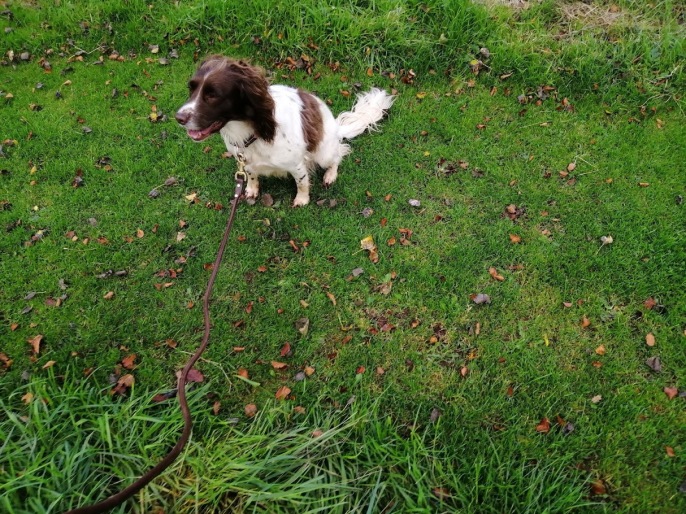 I put our guest dog for the walk on her lead for the short distance through the sheepfield to a gate on our right. Once through this I let her off again as we traversed a narrow slip of green between the Grange on our right & a wonderful pond on our left. 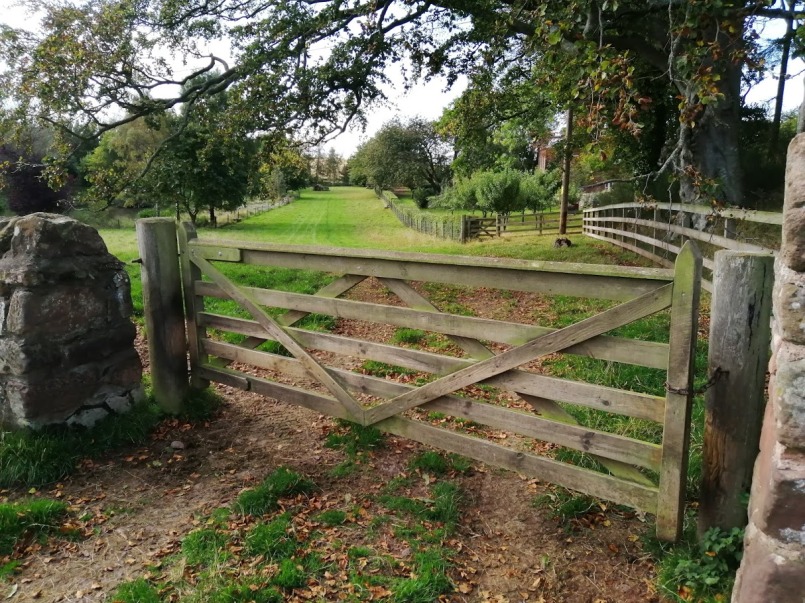 Garvald Grange was once part of the Whittinghame Estate – having bought Papple, Papple Westmains and Bogend from Lord Blantyre;  James Balfour then purchased Garvald Mains and Garvald Grange from the old family of Douglas of Garvald. By the middle of the twentieth century the Grange was in the hands of agricultural conservationist Ken Runcie, who ran the famous Rosslyn pony stud, here with his wife, Margaret. 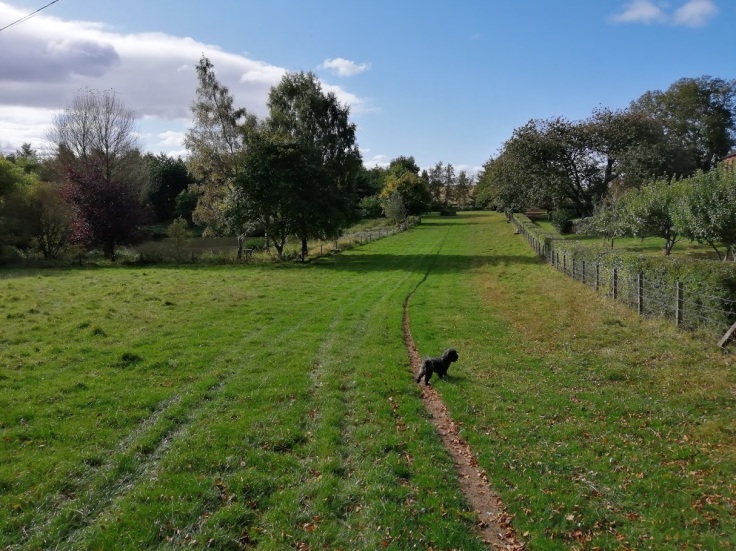 With the Runcies heading into retirement, into the Grange stepped the Strakers – Hugo & Caroline – who went to work planting flowers & trees like crazy. These attracted bees, who are well into the tiny white flowers of the Eucalyptus gunnii, planted by beekeeping Hugo Straker many years ago. When the Strakers bought the mid-19th-century sandstone farmhouse and 35 acres in 1991, there was little on the land except grazing for the Welsh Mountain ponies bred by the Runcies. 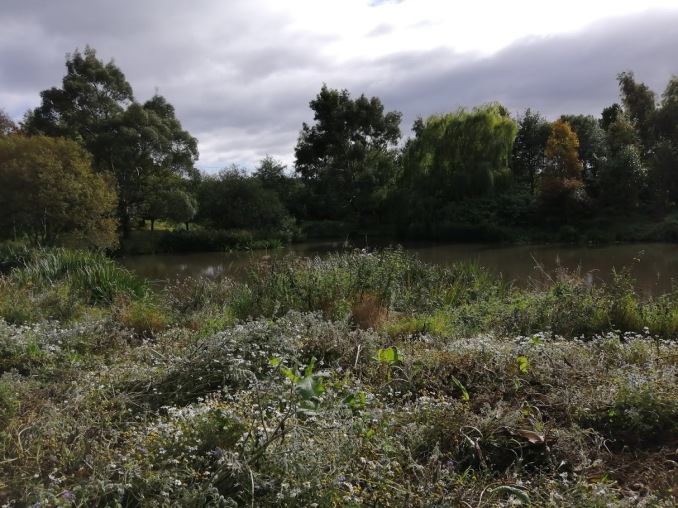 ‘There was a cherry tree, a walnut and a few big mature oaks, sycamores and elms, but everything else we’ve planted,’ says Caroline. Initially, with three small daughters to look after, she found the exposed location a trial. ‘I would take the children out in the morning and they were almost blown away. I can remember saying to Hugo “That’s it. I’m going to stay here for 10 years, but, after that, we’re moving”. But, of course, you create a landscape, then you get accustomed to it and then you begin to like it.’

At the end of  the wee green belt you meander through gates & a farm track to the Garvald road, where one should turn left.  At the bottom of the road sits the ‘Hidden Village,’  nestling in serendipitous & serpentine glory in the valley of the Papana Water, & built almost entirely from bright reddish stone hacked out of the nearby Rattlebags quarry.  For Trailers, there are public toilets. car parking, & even the tasty fare & friendly vibes of the  Garvald Inn.

The name Garvald was first used at what is now Garvald Mains farm – about a mile west from the village along the Papana.  Garvald village was actually called Garvald Kirk in John Adair’s map of 1692. That there is an amazingly well preserved hill-fort at Garvald Mains leads to my translation of Y Gododdin, which contains the name, I believe, of the man after whom Garvald is truly named – Gwrvelling.

No shield unwielded in that spear-flung field
They met war-waging equals, eye for eye
In gory battle’s struggle raging fall
Unshaken in the shield-storm surged his shout
Full faultless honour as he fought his foes
In phrenzied force until his will there fail’d
Before the grave of Gwrvelling the gargant
Some swardy heap of green fore’er became

Back on the Trail, it doesn’t actually go into the village,  however, but turns left at the bottom of the road, passing the extremely old church & heading along a path by the left bank of the Papana. This is also named after a member of the Gododdin contingent, I believe, called Bubon. The stanza reads; 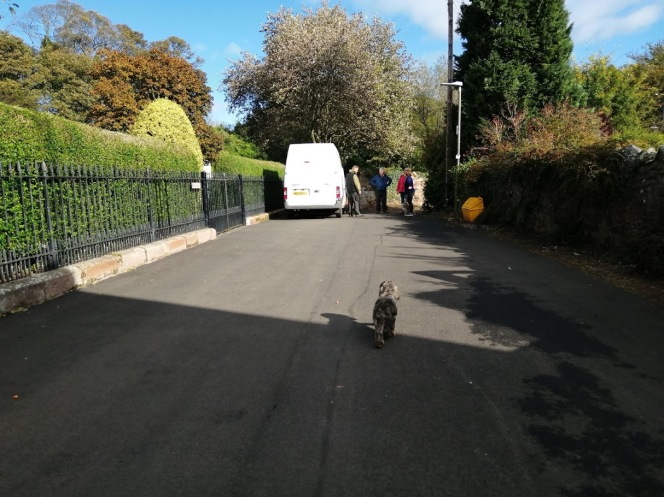 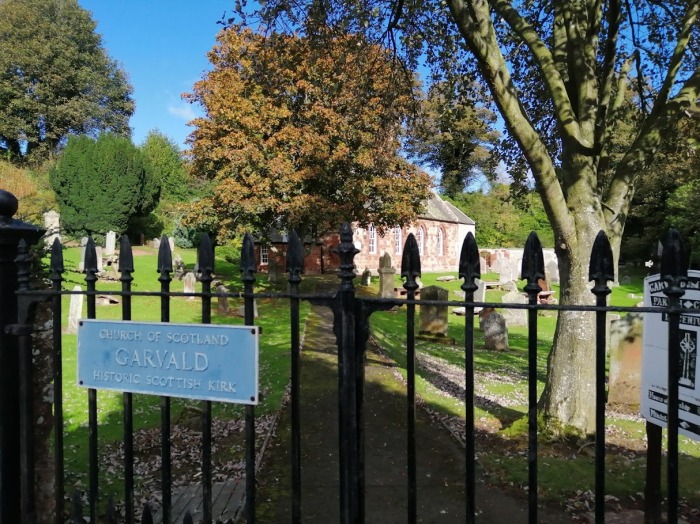 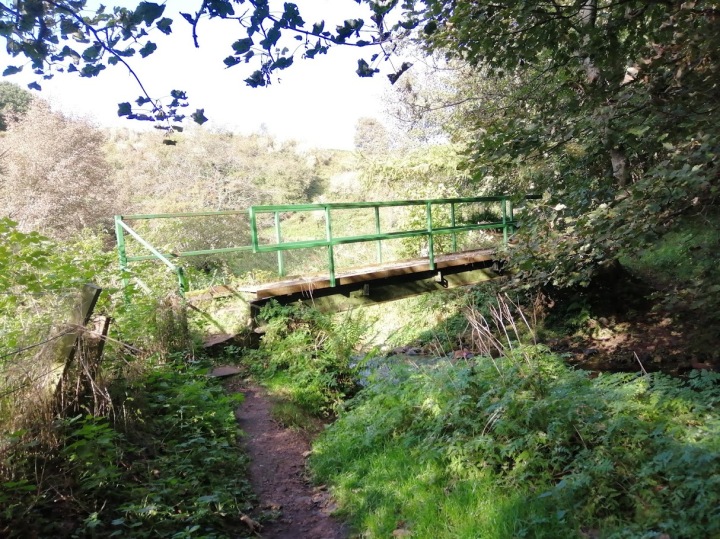 Just as a wee historical digression here, the ‘Sea of Iodeo’ is the Forth estuary. There is also a stronghold of ‘Iudeu,’ which Bede places ‘in medio sui’ – ie in the middle of a sea-strait which can only be the Forth. Much academic ink has been spilt over its location, but the fact this stronghold would also have been known as ‘Guidi’ leads us naturally to the island of Inchkeith (Inch-Guith / Inch-Guidi). The name alteration can be found in  the ‘Irish Tractate on the Mothers of Saints,’ which states;

Alma, daughter of a Pictish king, the mother of Serb mac Proic, king of Canaan of Egypt; and he [Serb, i.e., St Serf] is the venerable old man who possesses Culross in Strathearn in Comgellaig, between the Ochil upland and the sea of Giudiu (Mur nGuidan).

There is no archeological record of a Brythonic ‘Urbs’ fortification on Inchkeith, but then again there has not been a serious attempt to find anything. We do know it was a religious center at that time. Walter Bower, in his Scotichronicon, writes of an ‘island called Inchekethe’ in which Saint Adomnán  ruled as abbot, & it was this holy man who  welcomed St Serf on the latter’s arrival in Scotland. Serf would be the guy who saved King Loth’s daughter, Thaney.

I’d just like to chuck in a little something here. According to the Historia Brittonum of Nennius, in the 7th century, King Oswy of the Northumbria ‘gave back all the riches that were with him in the urbs right into the hand of Penda, and Penda distributed them to the British kings, to wit, ‘the restitution of Iudeu.’ ‘ This places King Penda at the Forth, & it may even be the historical reason that Traprain Law was also known as Dunpendyrlaw.

Back in 2019, the Gododdin Heritage Trail rises & falls for a while before reaching a bridge. Crossing it you see a couple of woodland trails, one of which climbs a steep slope up a valley. This one’s for us! 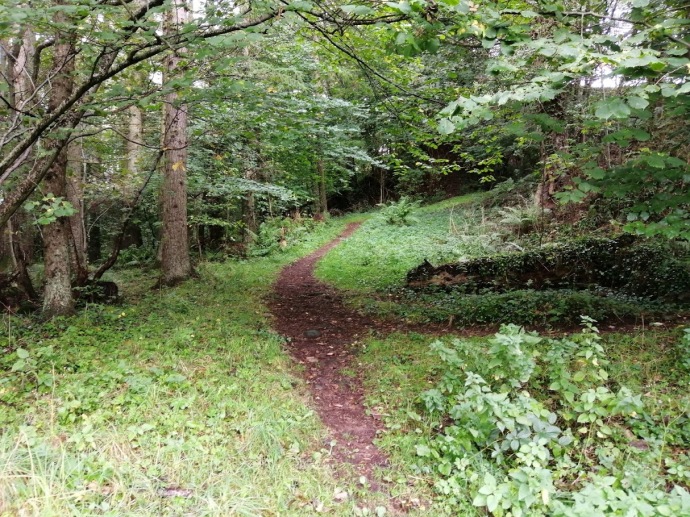 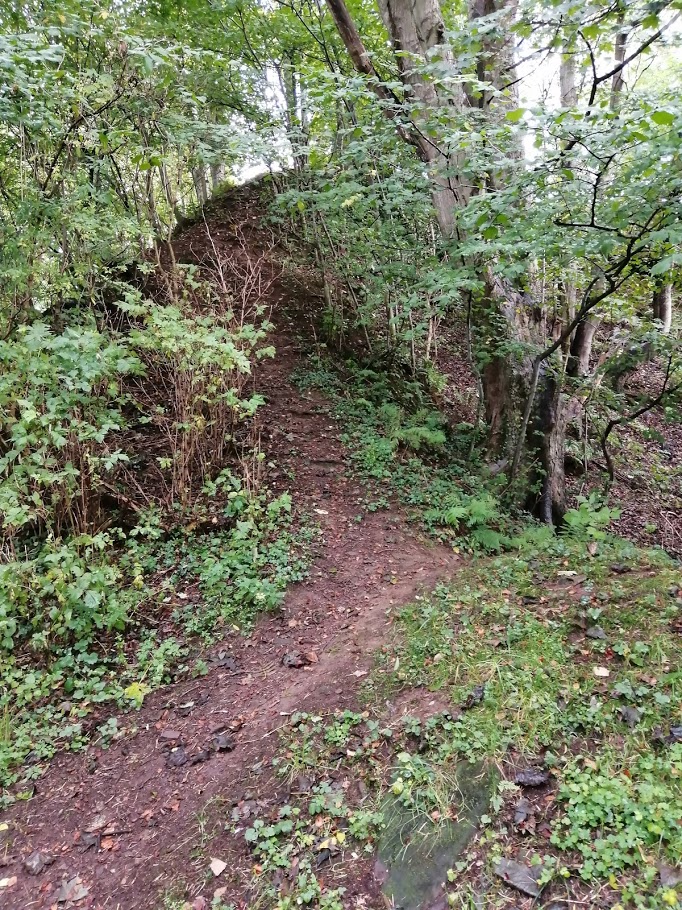 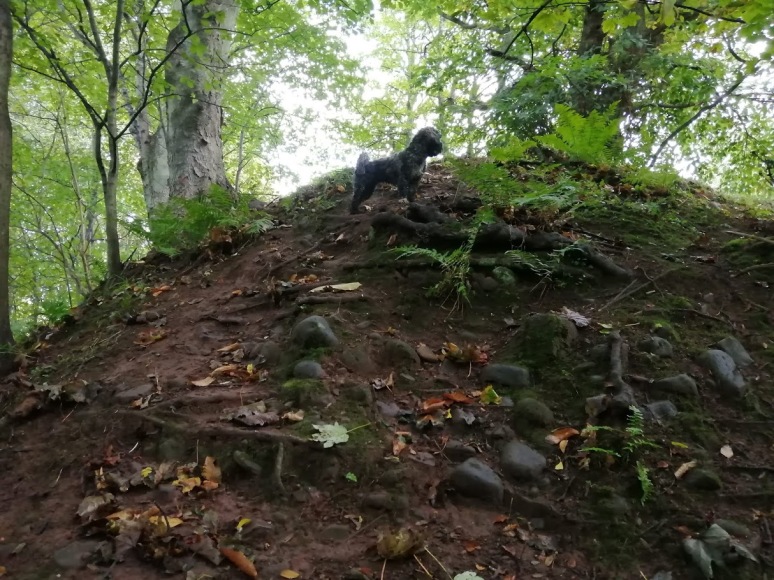 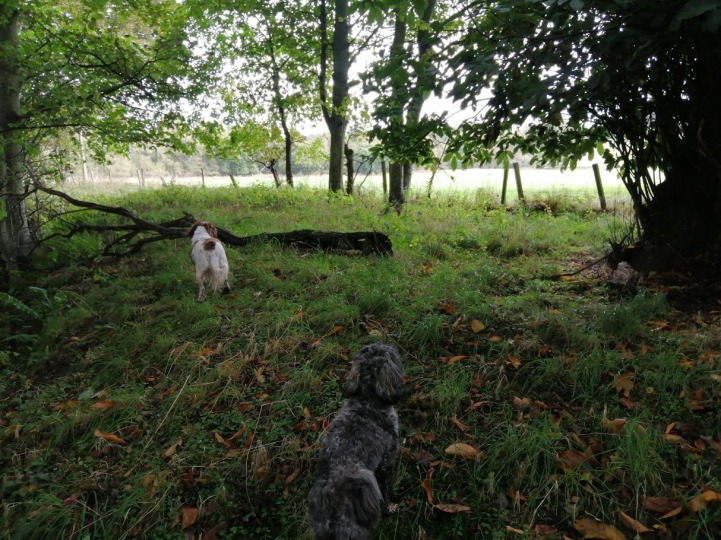 At the top of the slope one reaches Nunraw Estate & its funky Monkey Puzzle trees. One must head left now, by either hopping over the fence – theres a hole for dogs – & skirting the field, or following a very grown-over woodland track once trodden by the Nunraw monks, more of whom I’ll be chatting about next time.

For now, the field is best, & you eventually reach a gate, over which we go. Turn sharp left & head down towards the trees where you soon come to a  a crazy rickety bridge. At this point enter the river itself, turn right & in the style of the great explorers hop across the rocks & pebbles to the one true natural wonder of East Lothian – Nunraw Falls. 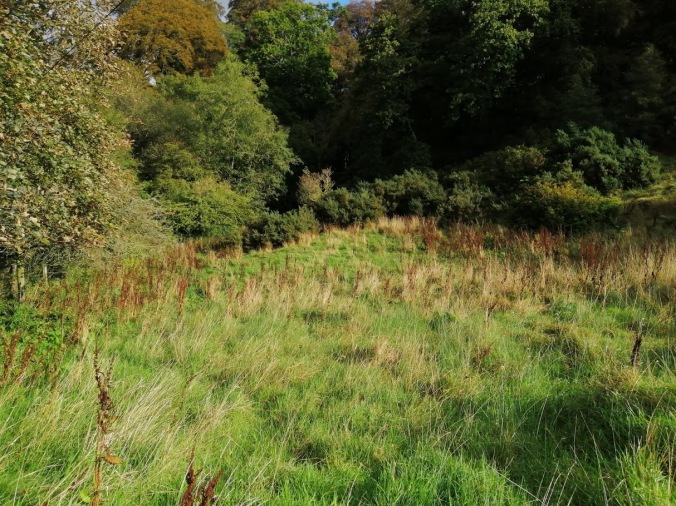 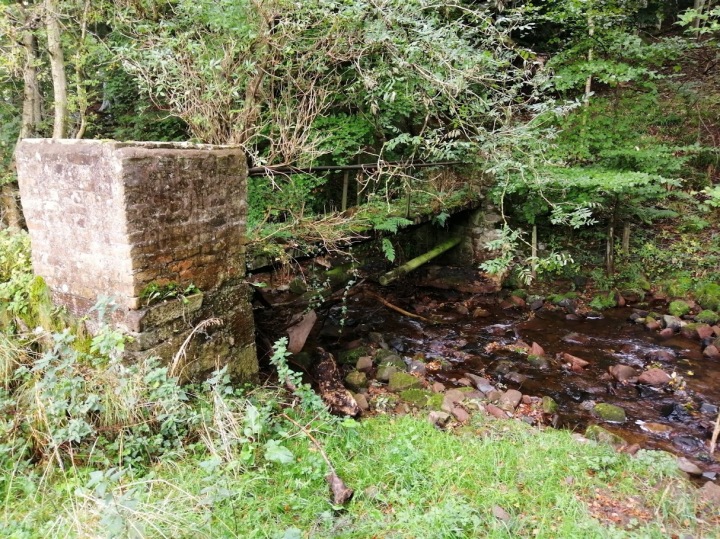 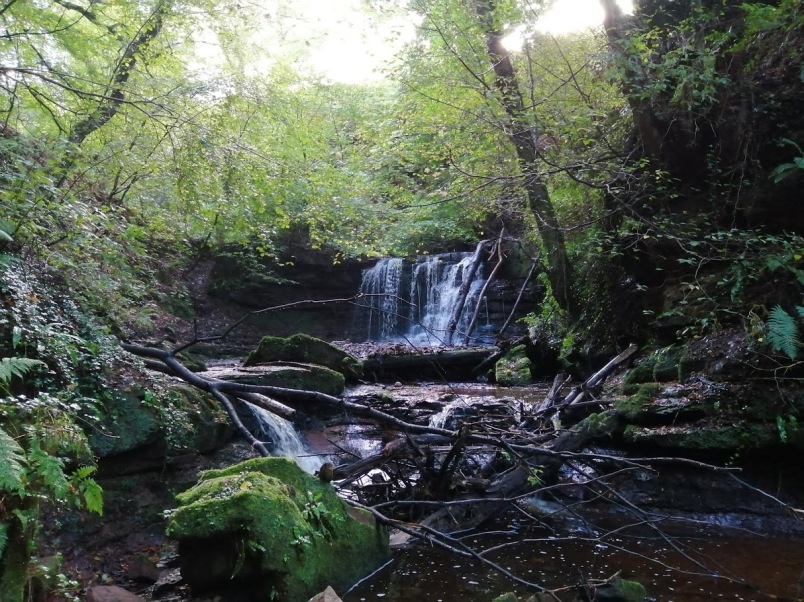 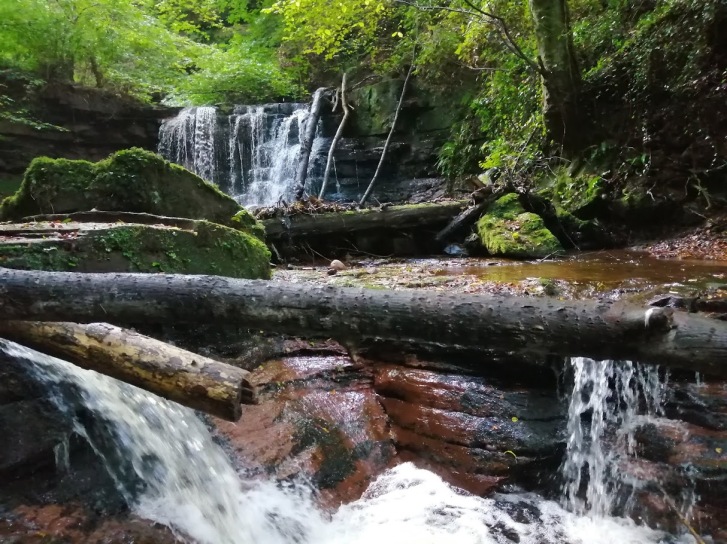 7 thoughts on “The Gododdin Heritage Trail: Papple to Nunraw Falls”