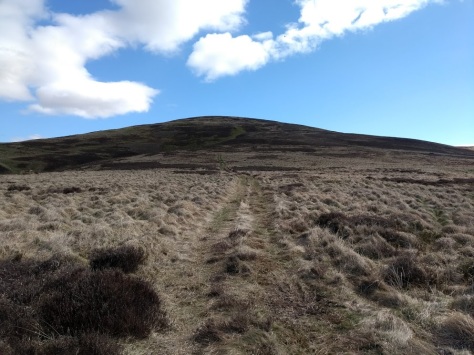 A combination of unchanging weather & an attack of the gout (ouch!) has delayed my creation of a new blog – spirit & body –  for some weeks now. However, in a recent gap in the cold & grey, like that which allowed Operation Overload to commence in the English Channel on D-Day,  I recently managed to crack one of East Lothian’s highest points – Spartleton Ridge. It is 468m high, with the Lammerlaw being 529m & Meikle Says Law 535m. Just before the expedition, I was on the receiving end of some vital gout-curing  ‘exfoliation treatment’ on North Berwick beach.

After their forced meteorological absence; the fields are finally greening, the leaves are finally sprouting, & East Lothian is slowly washing with the promise of  bringing summery succulence to the eye. Driving through said fields, we soon bobb’d & duck’d into the Garvald valley, rising again towards Nunraw, & beyond, into the wildest corner of the county. After a few winding miles of narrow, sheep-dodging, please-dont-plummet-off-the side, single road, one passes the parking area at the foot of Johnscleugh Farm. Another mile later, we arrive at a fork. Instead of carrying on the right towards Whiteadder, turn left instead & park up in the gravelly area. It was time to start the walk. 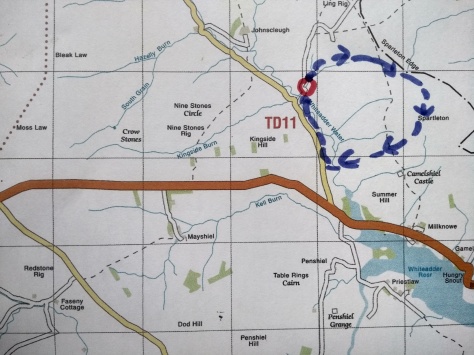 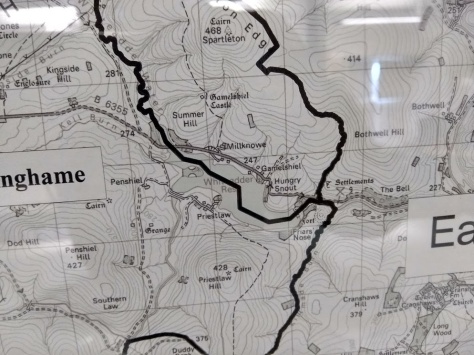 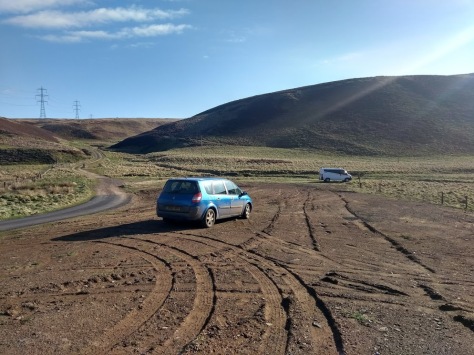 Me & Daisy were well up for it – gout is worse than toothache & even the dog had gotten bored of watching reruns of Father Ted. We followed the road up a little stretch, to a point where on our right a green route up Spartleton opened up.

As the calf-train commenced quite fully, I was startled by an animal cage-trap on a log over the hill-stream, a reminder yet again of how the Human Imperialist goes about its business. 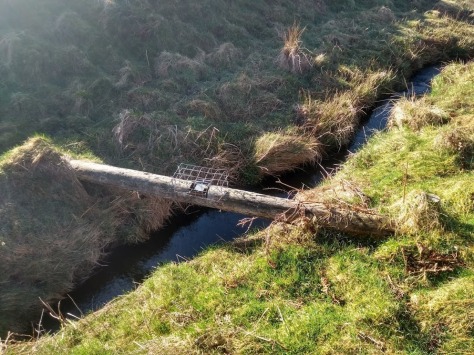 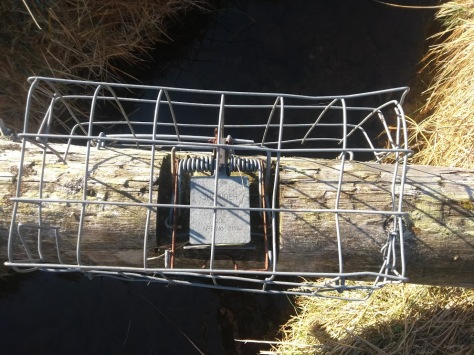 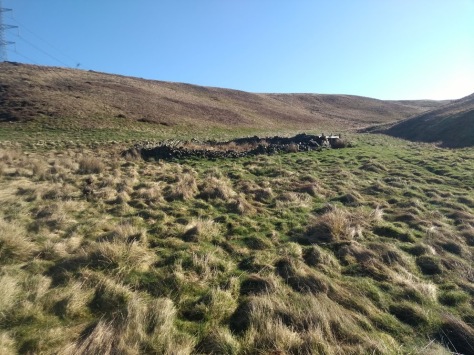 We then reached the crumbling stones of a broch-like sheep circle, which we passed to our left. From here we kept the fast-flowing stream to our right for a while until our half-path peter’d out into wild ruggedness. At this point – or somewhere near it – turn right, hop over the stream at any suitable place, & head uphill.

On mounting the haunches of Spartleton, full of the skeletons of unpurpl’d heather, I noticed my first slugs of the year. Is this where they spawn, waiting for Spring to warm the mountain slopes, onto which they swarm in the directions of East Lothian’s steadily burgeoning gardens? Not long after our encounter with the mandibles, we came to a rather strange man-made mound, one of several which appeared like icebergs on the heath, another human intrusion into animal life even in such a remote spot as this.

The area was dissected by a track-road, which we took to the left, & on hitting a wall a little later, we followed it to the right. This led to a gate to our left, which led to a decent road & the final few meters of the climb. 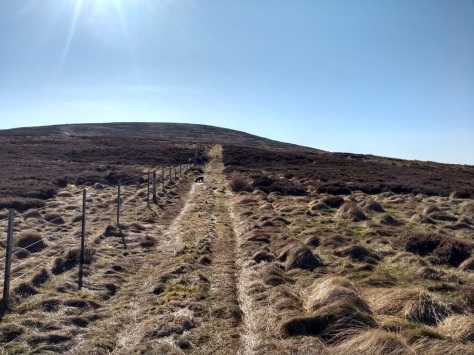 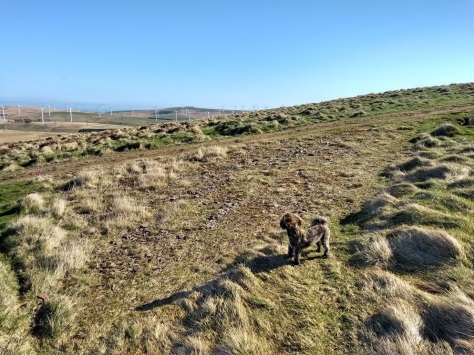 At all times the views & vistas were growing in beauty & magnificence. Hills all round us, the North Sea shimmer, the far-off Pentlands, gangs of wind turbines drowsing in the half-breeze, the explosion of colors in the fertile plains through the White Castle gap, the bleak brown-fades of the uplands, the occasional WW2 plane whizzing by (it happened twice) the cute love-calls of bird-life the only sounds, the sun, the stillness, & my little wee dog, scampering about like a puppet with fleas. 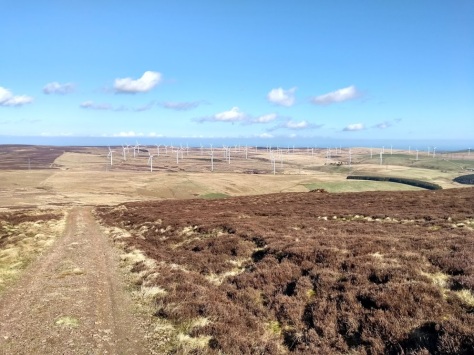 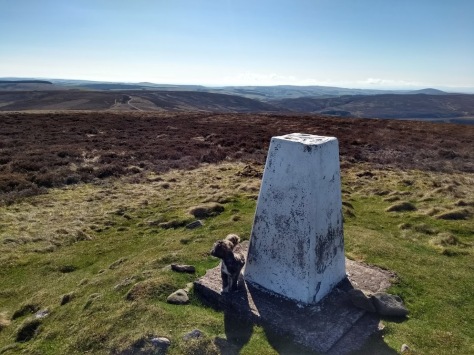 We spent a few moments at the cairn, Daisy chasing the non-nesting birds & me with the 360 degrees, then headed back downhill along a decent track-road. At the point where it made a sharp bend to the left, we instead turned sharp right, & followed a greenway until the moment you can see sketched out & photographed below. In essence, when the square copses above Penshiel are more or less aligned, like planets, then head downhill towards the trident of paths, the left one of which is reached by skipping over a fence. 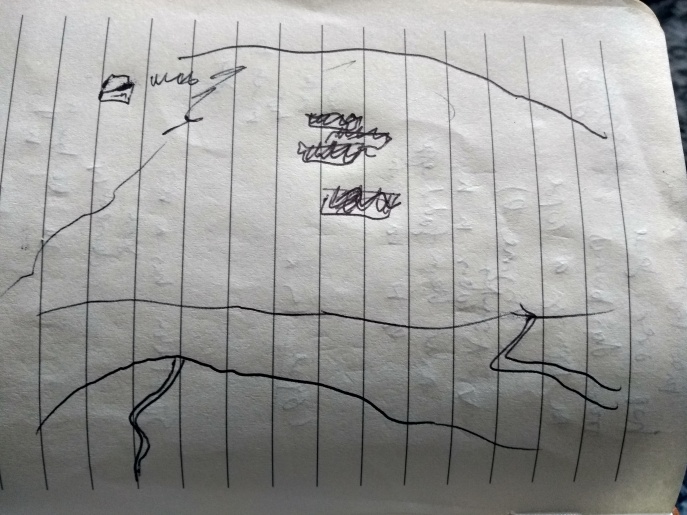 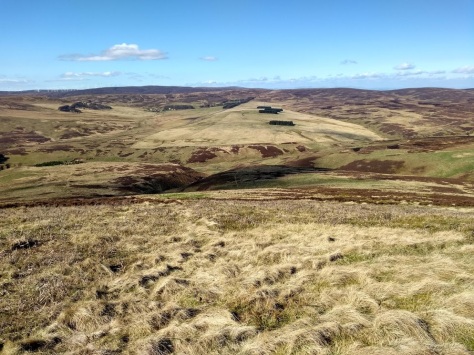 At one point I turned back to look At Spartleton, & discovered it has a rather serious demeanour indeed. The moment reminded me of how much a visit to the Lammermuirs is one of rapidly changing moods, one moment elation, the next indissolvable depression. Spinning around, & following my new path, it led me towards the tops of an evergreen copse, whose vivid colors on approaching were dissolving with glory on my sun-starved mind.

To our left in the wee distance, the twin gravestone-like remains of Gamelshiel castle. Only low ruins are left of this tower, which is likely to date back to the early 16th century. There is evidence of a vaulted basement, and the walls are around 1.2 metres thick. The structure was around 7.0 metres wide, although it is difficult to say now how long it once was. In his ‘Reminiscenses’ John Martine recorded;

It has a history of its own, & is situated in a deep glen or ravine. It is understood to have been a residence of the family of the Home Rigg of Downfield & Morton in Fifeshire, & of Gamelshiel & Millknowe in Haddingtonshire

Nothing really remains, no legend or anything, just a faded memorial to the passage of time. The only poetic impression it made on me was to pity the poor locals who would have to traverse the ten miles of rough ground to Stenton – in all weathers – under which parish jurisdiction Gamelshiel & nearby Millknowe are under. 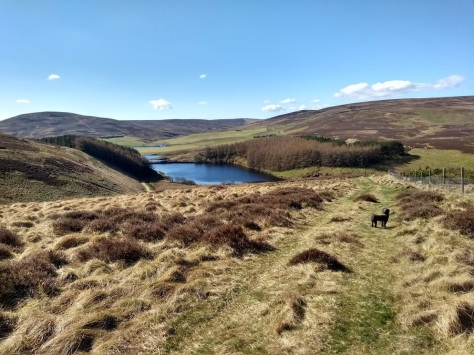 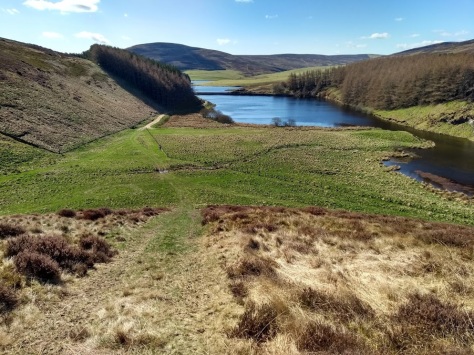 Beyond the wood, the path drops sharply in the direction of Whiteadder reservoir, which appeared like a drop of molten mercury in the hills. On reaching the bottom, after readjusting a moment to the static horizontalness of the level ground, we turned right & skirted the base of Spartleton towards the car. En route we passed a lovely lady from Penshiel out walking her dog, who was amiable to the nth degree, & large number of geese hanging out by the wee river. Then it was the car, a little Belle & Sebastian for the drive, & a rush of physical buzziness for having got stuck into a decent, tho’ not incredibly taxing climb. 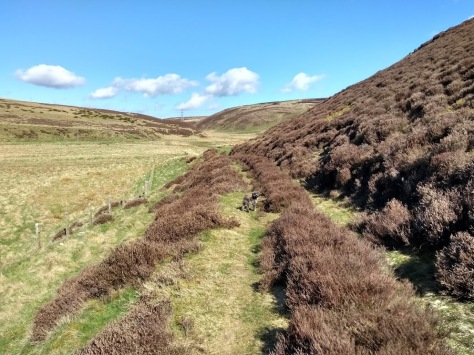 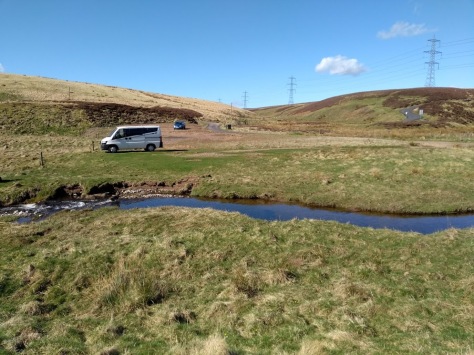